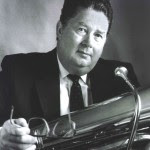 I, of course, took issue with this as I know for a fact that I am one of the most important people in Mikey's life but that is a topic in itself. To honor one of the other (than me) important people in his life, Mikey decided to conduct a lecture/recital titled "The Legacy of Harvey Phillips" at one of MY alma maters (Mikey now happens to be a professor of music there but that is a detail that will only get in the way). I met some friends and we took the families last Sunday night (yes, children should be encouraged to go to concerts).

Mikey did a good job with the lecture/recital. The impact of Harvey Phillips on Mikey went well beyond their bond as tuba players. He spoke about how Mr. Phillips taught him the priviledge and responsibilities of being a musician, a tuba player, and to be the kind of person that can be an evangelist for his art. He stated that many of the lessons that he learned from Harvey Phillips had nothing to do with music.

During Mikey's talk I realized that everyone needs a Harvey Phillips but very few people have one. No, I don't think we need people to try to turn the world into tuba players (or even euphonium players) but we do need to have people who help others become the best that they can be in whatever they choose. This can be viewed sort of like a mentorship but in this case it was more impactful.

As one of the other important people in Mikey's life I recommended that he not wait to pay homage to me and my influence on him. I can only wonder what he will come up with that lecture/recital. I've made some suggestions but I think Mikey has some work to do. I'll be sure let everyone know when he has that done and dusted. In the meantime, please try to be someone's Harvey Phillips. It won't be easy. It'll probably be hard. But it will make the world a better place for someone.

I will have to forward this on to my dad. He played the Tuba for many many years.

Cool post. We all definitely need people like that in our lives. I hope your friend pays tribute to you soon :)

Very cool. I bet you're a Harvey Phillips to a lot of people.

You are right...everyone needs a Harvey Phillips. And you are also right that Mikey should show you the proper appreciation!!

Loved this post - I think everyone needs someone to help them be all they can be in what they choose.

Thanks for making me smile today. Love the post :-)

Columbus loves tubas players at their football games, Since I dont like the school, I dont care to explain if someone doesnt know what I am talking about