"We choose to go to the moon. We choose to go to the moon in this decade and do the other things, not because they are easy, but because they are hard, because that goal will serve to organize and measure the best of our energies and skills, because that challenge is one that we are willing to accept, one we are unwilling to postpone, and one which we intend to win, and the others, too."
Posted by RockStarTri at 11/29/2008 10:25:00 AM No comments: 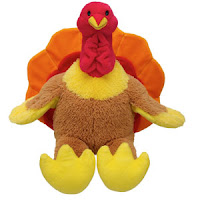 Yesterday was Thanksgiving. In addition to Dawn and my 15th wedding anniversary, we did a family Turkey Trot at the 6th annual Gail Gorin Turkey Trot in Smithtown, NY. Dawn and Courtney did the 1 mile fun run. I was amazed on how strong Courtney looked. Most days, Courtney would be the rockstar. In fact, her performance earned her rockstar status but there was still a 5K to be run.
Amanda made the trophy ("Victory") and it was winner take all. I tried my mind games on her in the days leading up to the race with little success. Last year she beat me by a little over 7 minutes. After the start (with no ready, set), I stayed with Amanda for about 10 seconds when she turned and said, "See ya." My goal pace was 11:00/mile and to see how many walk breaks I needed. Amanda was trying to beat her 5k personal record of 27:23.
I knew something was off when slightly after the two mile mark I saw runners joining the route from the wrong direction. Not one or two but about a hundred. Most were fast (or at least faster than me).
I ran a good race for a gravy sweating, injured, old, fat rockstar bettering my time from last year by a little over 30 seconds finishing in 34:18. This was my second fastest "5k" of the modern era even though the Garmin said 3.2 miles for me.
Amanda stayed with the lead group. Unfortunately, the leaders went off course and ran close to 4 miles! She still beat me soundly. No one knows how long she actually ran. Her time didn't set a PR but she came in 4th for the 0-18AG and 15th women overall. We don't know if 1,2 or 3 ran as long as she did but trophies were awarded only three deep so no hardware for her. A very impressive effort nonetheless. She won the trophy bettering me and earned rockstar status.
I may never beat her but will keep trying. There will be another 5k family challenge soon. Maybe the Ho Ho Ho on December 20. I think I have to watch out for Courtney a little too though.....
Posted by RockStarTri at 11/28/2008 08:37:00 AM No comments:

First, an update on the weight loss war:

Just as important, I ran a race on Sunday, 11/16 - the Mineola Mustang 5K. For most of the time I looked like I was running but much slower in comparison to "real" runners. I planned in 2 walk breaks: one at the one mile, a second at the two mile, and threw in an extra one at about the two and a half mile. The wind was howling and I consider my finishing time of 35:34 a great success for a slow fat rockstar.

Even with the injury and weight loss challenges, this was my third fastest 5K (in modern times). The anniversary of my now second fastest (then PR) 5K is next week. I'll be running the same event, the Gail Goran Turkey Trot on Thanksgiving in Smithtown, NY ( http://www.leukemia-lymphoma.org/all_page.adp?item_id=317828 ). Dawn and Courtney are doing the fun run and Amanda and I are scheduled for a repeat showdown in the 5K. Last year she toasted me finishing a little over 7 minutes better than my performance (remember, this was my PR :( ). Stay tuned to see if there will be the smell of burnt toast for Thanksgiving in the Rock Star household or will I take some time out of her!

"A man's got to know his limitations" - Dirty Harry 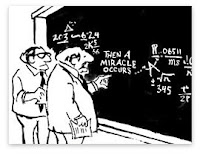 There were a bunch of quotes that I hoped to include in this blog entry (in addition to the picture to the left) including the quote of Jim Lovell character in the movie "Apollo 13" of "we just lost the moon."

The reality was doing the Philly Half was a long shot given my physical state. I gave training for it a try and could have slogged through the race, but it wouldn't have been a happy day (or a happy week or perhaps even longer after). My longest run is about 5 miles and that wasn't smooth (I know, how many of my runs are smooth?) so, I've decided to not do this race.

I haven't "lost the moon" as there are other races on the horizon and the primary goal is still Eagleman in June. I'll shoot for a different half most likely in January and will fill in a few short races as training exercises in the near term. Most won't be determined very long beforehand so check back frequently if you want to run with the "Rockstar."

In for a penny, in for a pound

The weight loss battle is still raging. Last week the scale went the wrong way (said +2) for a total weight loss of 7.2. This week it went the right way (-1.2) resulting in a total loss of 8.4 pounds. Weight watchers set an initial target of -28 pounds. While I have more than the 28 to lose, this is a good starting point. Now I just have to keep focus.
So I was looking at my 2009 race plan. The early part of the schedule was set with StA in April and Eagleman in June. Of course, NYC Marathon is penciled in for November but that left a hole between Eagleman and NYC26.2. I needed to pick a race with enough time to recover from Eagleman and early enough so that it wouldn't impact NYC. The contestants were Timberman in August and Mighty Montauk in October.
Either could work. Each had advantages over the other but I had to decide as Timberman would close out soon. I took the plunge registering for Timberman this morning. I'm figuring if I get in shape to do Eagleman there shouldn't be that much more to get ready for the hills of New Hampshire a couple of months later. The cronies that I'll be training with are in for T-man as well so put August 23, 2009 down on the calendar. I'm going for it.
Philly half  is still undecided but that'll work itself out one way or the other shortly. Stay tuned.
Posted by RockStarTri at 11/04/2008 09:37:00 AM No comments:
Newer Posts Older Posts Home
Subscribe to: Posts (Atom)