Some 2015 Events to consider

You have to start somewhere.

What is your sound track? 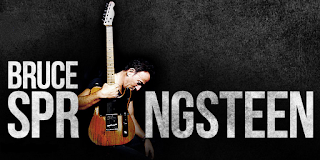 Last Sunday morning I went to my now normal 7:15AM spin class. This week the class was a little different: the music for the spin class soundtrack was going to be only Bruce Springsteen. I was a little skeptical how it would be since most of the time they play technopop or Rihanna or Beyonce' or something like that at these classes. The most mainstream that they do seems to me to be some old Michael Jackson. I wondered how Bruce would turn out.

I had a great class, felt like I pushed it more than usual, and believed it to be mostly related to the sound track of the class. There were more old guys than normal and the class was close to sold out. The energy was good and the time flew by. All good.

On the way home I got to thinking (always dangerous). First, I realized I have never seen Springsteen in concert and need to fix that at my next opportunity. Second, I started thinking of the impact of music on training and these is where my brain keeps pondering. I normally train with music. I have a bunch of old iPods that I rotate through. There was a time where I even got one of those water proof iPod holder/headphones and it worked OK even for swimming until it broke (someone said I broke it but I won't admit guilt). Racing often outlaws music devices so I need to make up a soundtrack to keep me going. Even when they didn't I found out that iPods don't like when you dump water over your head to cool down and you sort of dump the water on the iPod. I learned that fairly quick though (these I did break).

I saw the studio is doing something similar to this next week where my Friday night semi regular classes will be a Taylor Swift class. I think this might an opportunity be time to break out the Computrainer on my road back to real training.

What do you listen to while training by yourself?

My week wasn't a good week in terms of following my dietary goals. Even so, I lost some weight.

In the early part of the week I wasn't feeling great so took Monday off from work. Tuesday was a return to the rat race and then the deep freeze seem to hit everywhere.

Especially my water pipes, which froze on Thursday at 3am in the morning.

Because of that I was up all night and fell back into bad eating issues. Of course frigid temperatures made for an easy excuse. What's the correlation? I don't know but it sounded good.

I was surprised that I lost a little weight but was glad anyway. I asked the question to myself of what made a successful weight loss week. I decided that anything better than 1 pound in a week would be a success. Otherwise I need to figure out what happened.

For now, I'll ride my success for a while.

A sad story - the data of my getting fat.

After I wrote this I realized that some may think this a bit of a pity party. Let me be clear - it is not. I wrote it to come back to this post from time to time as a reminder of what happens when I lose focus. Because of this I turned off comments and I'm not putting this on Facebook. Don't feel offended. This is all about "me vs. me."
Thanks for your support.

Most of my physical and medical maladies are due to me carrying too much weight. I assume there was a seemingly magical threshold for my body that when I crossed it I triggered a whole bunch of bad things but have no idea what that threshold actually is or was.  It might have been a combination of weight and time (being fat for a too long) but again, that would be yet another mystery for me to fail to solve.

As the calendar flipped to 2015, I went back through my data (I'm a data hound and track way too much stuff) to figure out how much I actually gained this year. I have years of data points on what I weighed and when [there are some gaps but it is not material]). I was a bit surprised to find I only gained 11.4 pounds in 2014. While not great, I expected it to be more. Of course losing 5.2 pounds in the last week made this look better than it was.

So, I kept going back in time to find where it got bad. 2012 had me gain 34.6 pounds but this wasn't where my troubles began. I completed Ironman Florida in the first week of November 2011. I found in the year of 2011 I gained 21.2 pounds, most of it in the 2 months post Ironman.

But my weight gain did not start post Ironman. It actually began between my bike accident in 2010 and the start of my actual Ironman training. The lowest I've weighed in the last decade was 245. I hit 250 in September 2010 and gained more weight while training for an Ironman. Yes, I've proven that one can gain weight, and a lot of it, while training for an Ironman. I've also proven I can gain a lot of weight after Ironman too. I don't have much more to prove in this area.

There is a concept called nutrition periodization where you match your nutrition (intake) plan with your  training (consumption) plan. In summary, during periods of high training you need a higher caloric diet. As you lower your training volume, you need to lower your calories in. I failed in that not only did I, post ironman, keep my calories high, but I reduced the quality of the food I consumed. I replaced salad with french fries, breakfast at home became fast food breakfast sandwiches on the go, first one then two (hey, they were on sale, 2 for $3), and the spiral kept spinning in the wrong direction.

The last time I lost weight (before prepping for Ironman and at the beginning of what I call adult onset exercise) I started at 328.4 and ended at 245 for a loss of 83.4 pounds. So it can be done and I can do it.

This time I'm starting at 351.2. 250 would be great as a long term goal. 101.2 pounds. While that will be a great long term goal, I think it is too big a goal for me to grasp so I need to go after smaller chucks. I think it might be novel to track my lost weight against when I gained it. So my first goal is to lose the weight I gained in 2014. So 11.4 pounds to my first goal.

Last Friday I signed up for Weight Watchers. I figured I had to start somewhere. The number on the scale, while not a surprise, wasn't pretty.

Later that day I went to Soul Cycle and knocked out a 45 minute spin class. That too wasn't pretty but I got it done.

Last Saturday I "ran" a little more than 2.5 miles. My ankles complained a lot afterwards about it not being pretty.

Last Sunday I got up early and completed a 7:15am Soul Cycle 45 minute spin class. There was a heat malfunction in the studio so it was stupid hot. HOW HOT WAS IT? It was so hot the instructor joked it was a Bikram cycle class. I though about leaving midway through the class but stuck it out. Again not pretty.

Monday I was supposed to swim but I got distracted by a basketball game on TV. Duke was pretty, me sitting on the couch wearing my bathing suit watching them till the game was over, less so. I could have headed towards the pool but for some reason I headed towards the bed instead.

Tuesday I took an opportunity to walk during lunch. Cold, windy, a break for a salad in the middle, only 1.4 miles in approx. 27 minutes. It counts but still wasn't pretty.

Wednesday was New Years Eve. 715am spin class. Woke up not wanting to go, went anyway (it beat going to work), they fixed the heat (yeah!), but my body was yipping for all this "exercise."  It wasn't pretty.

I celebrated New Year's day by doing close to nothing. I did take two naps since I was up way past my bedtime the night before waiting for the kids to get home. Then to the outlaws house for a dinner where I ate way too much. Still not so attractive.

Today I weighed in for Weight Watchers. I lost 5.2 pounds this week.

It is a start. Perhaps there is hope for a prettier week next week.