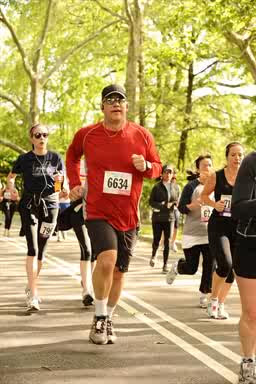 I've purchased only two race photographs in my running career. The first picture was when I was racing El Tour de Tucson a few years back and the photographer positioned himself on a hill so that he got a picture of me climbing with a nice saguro cactus in the background. Luckily I saw him halfway up and it gave me enough time to sprint it up that hill so I dropped the guy who was duking it out with me (he had a hand cycle) just before the shutter snapped. The second picture was when I raced in my first race that had a swim component (a swim/run biathlon). I bought the picture of me coming out of the water mainly because that picture had in the background some poor souls that I actually beat out of the water. Imagine that.

All other race pictures of me always had something wanting. I can't imagine how difficult it is to get a good picture and it really takes some luck. Ok, maybe a lot more than some luck. This picture was taken last weekend in Central Park near the end of my race and I'm thinking about purchasing it. There are some issues though: 1) I look a little like Gigantor running with the smurf harem; 2) I still am fat; 3) You can see that there are some muscles hiding but seeing calves from the front is a bit of an issue in itself. In the plus side, I'm running and that's a big deal these days.

I think it is a great photo!! Get it.

Dude, buy this picture! You look cool and totally stand out in red, amidst the tinies near you. I'd definitely do it.

P.P.S. Thanks again for the jerseys. Hope to use them, then outgrow them.

You don't look fat, just giant. But you do look fast. This is a good picture. I would buy it.

Great photo, you look like the terminator, surrounded by fembots....

No manboobs- Check!
At least one foot off the ground- Check!
Not looking fat- Check!

I'm picture picky, myself. Always find some reason to NOT buy.

Oh for God sake, just purchase the picture!! I think that you look great:) You are smiling and you look like you are having fun!

It is a good pic! You should purchase that one. Get the digital copy so you can crop out a few of the smurf's ...lol

I think this is a great picture! You look like you are running strong. You really look great, and think of all the hard work you have done to get where you are! I always hate my race pictures, I think I have gotten one once.

Stop being so hard on yourself! You look like a giant STUD in this picture. Must be all that hot yoga. And by the way, congrats on being able to run. I know that's an important goal for you. So glad you were able to and hope that it was pain free.

Well, based on that picture, I'd do you.

But I'm not sure if that's a reason to buy or burn it. Because my standards? Not exactly high these days.

What were we talking about again?

O, that's right, your picture. It's always about you, isn't it?

I have to agree with Diane. Stop being hard on yourself and you ARE looking pretty studley in that stand out red. Buy it and don't regret it!

That is a really good picture. You look like a badass. I've never had one good enough to actually throw money down for, so you should do it. It might not ever happen again :)

I love you A races this year. never done either, but I've heard Eagleman ROCKS.

Thanks for your suggestion/comment! I know there is a mathmatical equation that will tell me how much carbs/calories I need over the duration. I need to do a little more reasearch on it I guess.

p.s. I tried Fig Newmans on the bike yesterday and they worked pretty good. Very clean and perfect size to actually eat witout it interupting my bike. fyi.

If you are even thinking of purchasing it then it is a keeper!

Yo hombre—purchase this picture—it's great! Quit with the "fat" rhetoric. What's more, you stand out because you have that kick-ass red race shirt on amongst a sea of stereotypical "this makes me look thinner" black. Not to mention the shades, giving you a bit of the Terminator look. Even better that you are a big dude among these waify little nymphs. Tell everyone that the girl behind you became so fatigued that she eventually jumped on your back and you set a PR on your way to the finish line. When you finally crossed, the rest of the women around you raised you over their heads like Rudy and you were douse with champagne.

Sorry... I was sort of projecting what I want my Ironman finish to be like.

get it posture is good, head is up and you look like you are flying through the pack (I'm sure you are).

Please stop fishing for a compliment and get the picture. You look great- you've inspired me to run more and I've dropped 8lbs so far.