Yet another reason to hate peas. 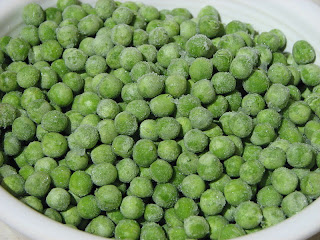 Last Friday I tried ART on my ITB. My logic regarding this is that I've had a bad back for a long time and that never stopped me from doing these crazy athletic stuff. The issue with my hip has probably been there for a long time too but the root source of everything was the ITB issues that I had while training for the Disney 26.2. I "think" that this triggered my hip pain since I adjusted my gait to compensate for ITBS. If I can get my ITB under control, I may be able to return to some sort of equilibrium where all of my physical ailments align in a no pain zone. Yes, it is a reach but why not give it a try?
ART has worked for me in the past. I bounced this idea off DrLarry and he said it was worth a shot. He placed his magic fingers on my ITB and very painful things started happening. He loosened up a lot of the tightness and said I would be sore for a while. What. An. Understatement. He said to ice my leg. We keep a frozen bag of peas in the freezer just to be our "ice pack." I bailed on my ride scheduled for Saturday morning and swam instead with the expectation of riding Sunday instead after Amanda's soccer game.
My girls had a good start to an athletic weekend. Courtney's soccer team won their first game of the year. Amanda's distance melody relay scored a 3rd place medal at an invitational with her doing the 800m leg, her soccer team tied on Saturday and Sundays game was well in hand with Amanda even scoring a goal until it went very bad. She went down hard on a tackle and didn't get up. Her coach carried her off the field. I went over and she couldn't put any weight on her ankle so I carried her the half mile or so to the car and instead of riding I spent the next few hours in the ER. No break seen on the xray but her track season and soccer seasons are over.
Now we have a family pea dilemma. We need to buy more peas since I'm using them for icing and she is using them for icing. The worst part about it is that peas are viewed as close to poison in our house as a food choice. No one here likes to eat them. No one likes to need them for icing either. I hope to not have the opportunity to find another reason to hate them.
Posted by RockStarTri at 5/03/2010 10:00:00 PM

I really hope your hip and Amanda's ankle heals soon. Injuries suck! I hate peas too.She must be so upset hear season(s) are over - maybe with some PT she can get some stuff in late summer? Not much consolation I for an athlete like her, but it is something to hold on to. I hope you find you do not need hip surgery - that you just need some deep tissue massage or something instead. Good healing vibes heading you and Amanda's way!

peas are perfect for icing. Little frozen pebbles in a bag...

We've had a bag of peas in the freezer for like 5 years, neither of us like peas and I am not even sure how it got there? Thanks for now giving that bag if peas a purpose!

Hope the ART goes well for. Keep us updated!

Peas are the terrorists of the legume world!

That's why I love them so.

Hope all goes well for you and your daughter!

And all they ask in return is YOUR IMMORTAL SOUL! BWAH-HA-HA-HA!1!

we use bean bags from the freezer....

it adjust to surround whatever part you are icing and stays cold really only 15 min or so...so no damage from over icing.

I am so sorry to hear about Amanda's injury. And we only use peas for icing our injuries around here too. I wonder if my kids will even know you can eat them...

Oh, I am so sorry to hear about Amanda's injury:( That just sucks...I know that if my daughter was told her B-ball and track season was over she would be devastated. Hopefully your daughter will heal and all will be well:) We use frozen veggies for ice packs too!

That sucks for Amanda!

I don't understand the point of peas. I'm not a fan, and just eat around them.

Yikes, sorry to hear about your daughter!! Hope you're starting to feel better too! I'm not a big fan of frozen peas either, but fresh from the garden!? Yum.