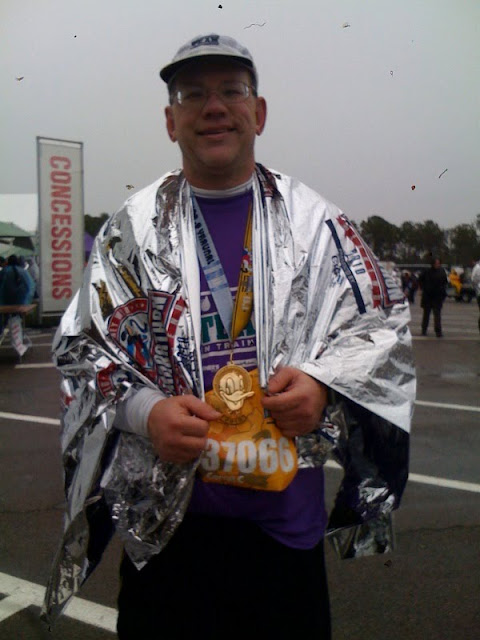 Almost any recap of last weekend's Disney races has to have the weather as the leading character. Going in I knew that it was supposed to be cold and I thought I packed OK race wear but realized (too late) that I always somehow disregard the impact of rain. Mother Nature released both rain and cold at us in the land formerly known as the sunshine state.

I expected the leading character of this weekend to be my knee pain coupled with my lack of recent training. My last real run was before Thanksgiving meaning that I really haven't had a significant run in over 6 weeks. I thought that my fitness wasn't totally shot but my knee was getting worse. To add insult to injury (pun intended) my hip was starting to hurt too and I thought that was due to the PT making me stretch where no stretch has gone before.  I did find some old magic anti-inflamatories in the back of the medicine cabinet and started taking them a few days beforehand. I also bought a, hopefully magic, ITB strap to help lessen the ITB tension. I would have bought a voodoo doll if it was available as well so, why did I attempt this race at all? One word sums it up: stupidhead.

I originally signed up for the full Disney Marathon via Team in Training. I've done a bunch of events with them. I wanted to do a marathon to prove to myself that I could and my 2009 NYC26.2 dreams had to get deferred once I got hit by a car while riding. To make Disney extra special I figured I could do another event with the Team even though I was training more on my own. They actually wound up hooking me up as they, as the primary charity for this race, were able to switch me from the full to the half. Otherwise I would have been locked into the full and that would have impossible even for a crazy person in my physical state. There was little difference on my doing this race on my own vs. doing it with the team as I didn't partake in any of the TNT festivities and even stayed at my Florida house instead of with the team. (Note we rent this house out for vacations and such so check out the website here if you are interested).

We arrived in central Florida on Friday afternoon and the rain started shortly after our arrival. The weather report called for temps in the thirties and rain throughout the half. Then it was going to dry up and get cold for the full. Oh goody.

After getting hooked up with the right race number at the expo we decided to get an early dinner at a local Olive Garden. What a novel idea as there was a line out the door with marathoners at 5PM. I normally freak out the night before real events so I decided to have a glass of wine to mellow me out and it worked (!) so this has been added to all future prerace rituals. We went to bed early with the clocks set for 2:45 (race directors suggested being onsite before 4AM due to road closures, etc).

I've was trying to figure out what my race strategy should be and figured that I would start and see how it was going. I would "jog" the first 10 minutes, walk a minute of every ten and continue that as long as there was no significant pain beyond the usual. If there was discomfort, I would walk. If there was pain, I would stop. My hope was to run at least a 5k of the half and not get picked up by the sweep vehicle (Disney has a bus that follows the race at 16 minute/mile pace and if it catches you your race is over). I wanted to finish it to get the medal and to "earn" the shirt.

My wife wasn't trying to talk me out of my plan (which was weird). I guess she knew I knew I was a stupidhead and there was nothing that she was going to say to convince me otherwise. When I woke up I had a text from my coach of "you're not going to do anything crazy, riiiiiiigggggggttttt" but doubt was creeping into my head.

We left for the race start and the weather was horrible. The car thermometer said 33 degrees and it was raining. The wind was blowing. We were able to park at Epcot right near the start and decided to stay in the car with the heat on until 4:45AM. That was one of the wisest moves we made all day.

We spent a few minutes in the TNT tent to get out of the rain and now the snow and sleet started. It felt like jellyfish stings on my face. The fashion statement of the day was wearing a black leaf bag as a coat and I was one of the few that could make it look good. The race announcements said that it would take 20 minutes to walk to the race start and I got there just in time for the corral to start moving. They had me in corral "C" which should have been for sub 2:20 runners but somehow I was able to convince them at registration that this was my place too. This was part of my "don't get on the bus" strategy.

The race started in the dark and the crowd started moving. Then everyone started stripping off layers and the wind was blowing the garbage bags around. They were incredibly slippery and I'm surprised that I didn't see anyone go down. I ran my 10 minutes and then stripped off the garbage bag. Some of the race course was narrow and with almost 20,000 runners it got tight. I ran another 9 and then stripped off a fleece that I expected to throw away anyway (note that Disney said they were collecting the clothes discarded and would donate them to some charity). I then got into somewhat of a rhythm but I kept going too fast. I wanted to run about 12:00/mile to make sure I was jogging but the Garmin kept showing me as sub11:00 during the run portions (once I even saw sub 10:00). Normally I would be looking for a quicker pace but I didn't want to blow myself up with a quick pace.

But overall I felt OK. I started getting tired after about an hour and I was then coming up to the Magic Kingdom. The excitement of the crowds got me to run through  the park and just past the 10K mark my body started aching so I decided to walk a bit. I was happy. I exceeded my expectations. I was in no danger of being picked up by the bus but now I had to get back to Epcot. The sun was just coming up.

After walking about 5 minutes I decided to give a walk one, jog four minute deal a try. I would break it up at every water or nutrition stop (note that frozen gels have the consistency of a tootsie roll) and was feeling better.

Then stupidhead hit again. I did this race 2 years ago and did a 2:53 with a lot of walking. If I could beat that time it would be great. I started picking up the pace. Then I figured if I really pushed it I might break 2:40. I didn't, finishing just under 2:43, but my last 5k was my fastest split. Go figure. I finished strong.

Then reality hit. I went right to the medical tent to get ice for my knee. I found my wife and gave her a kiss. I wasn't feeling excess pain but my muscles did know that they did something. Overall I was in better shape than I hoped for beforehand.

Sunday I cheered on some friends doing the full. It was even colder (mid 20s) and the wind kept up. They had a hard day but got it done. Good job guys. It gave me an appreciation for how this is and my wife does it a lot.

Wow! This is very cool. I kept reading it, thinking that I would have wanted to turn back (so cold and wet). Congrats to you for sticking with it and killing your previous time (by 10 minutes, right?).

Way to finish strong! Sounds like you are going to have some PRs heading your way once you are able to get back to 100%. Well done.

Congrats! Kudos to you also for sticking it out thru the cold and rain... as Diane would say- "You are AWESOME!" I have to agree! Be proud! What a feat and to beat your previous time by 10 min. WOW! You are an inspiration... I hope I can do as well on my first half marathon.

Congrats on a great race even though the weather wasn't the best. I'm glad to hear you were able to finish! Rest up!

Congrats stooopidhead! Glad to hear that your wife is the voice of reason and support! The goofy isn't goofy, it might just be perfect.

Your determination is so inspiring!
Thank you for posting! I need all of the insiration I can get! LOL