This race report will be done in multiple parts. Let me apologize now for the verbosity but this is a narrative which must be told to educate others who may try to emulate my insanity.

Tim, henceforth known as IronTim, and I got on the plane on Long Island Wednesday afternoon to head down to Panama City Beach and the flight was without major incident (I'm not going to go into the ice cream fiasco at MCO). We arrived on time, got our luggage, hopped into the rental car and headed to our hotels. We were staying at different condo/hotels where mine was right at transition and his was just a short walk down the road. After checking in we went food shopping for the week and for the event itself. I though I personally bought too much but there was some stuff that the store was already out of. When I asked if they had croissants, the supermarket bakery guy said that the Ironman people bought them out already but they expected more later in the week. Our shopping was not complete. Dinner at Margaritaville put us in a celebration mindset (even though no alcohol was consumed).

Thursday morning we wanted to swim at about 7:00 to get a sense of the light for the race and how to sight. It was chilly out and the water was nasty with swells of 4-6 feet due to the wind (which was also nasty). During the swim it felt that we weren't moving at all but then you looked up and you were a few hundred yards past where you expected. Also coming in we fought a bit if a rip current so you wouldn't move at all for a few seconds then flew in with the waves. I practiced body surfing. The water temperature was perfect and the water crystal clear to the point where we saw a huge school of fish (yea) and a few jellyfish (boo). I have been stung by jellyfish during a race before and had no desire to be stung again. As we got out of the water, we saw the water conditions were getting worse. There were a lot of athletes swimming and many were grumbling. I didn't feel concerned except for the fact that nasty water would hurt my swim time.

After we got out of the water we checked in for the race and picked up our bikes from TriBike Transport (which was in the parking lot of my hotel). The wind was coming out of the east so to tested out our bikes we did a short ride into the wind (slow) and with the wind at our back (fast). It was cool going 24mph with virtually no effort but we realized that wind could have a dramatic impact on the bike. The ride was a success as everything on the bike worked.

After some down time I was able to meet John and his wife. His blog was one of the first I ever followed and it was great meeting him face to face. His wife, like most triathlete's wives, seems to be a saint. Good people and I'm glad we finally met. His wife took this picture of us: 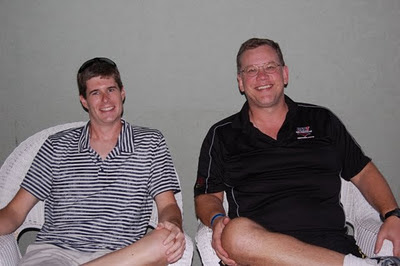 Thursday ended with the athlete dinner and mandatory race meeting. The best line was from the race doctor who said that all of the other folks kept saying they wanted to see everyone after they cross the finish line and he said he really didn't want to see anyone then at all! IronTim went to the airport to fetch his family and I tried to get to sleep early.

I was supposed to swim and ride again but I decided to get a big breakfast at the Waffle House and recon the bike course instead. I wasn't able to drive the whole course but did most of it and got landmarks before I picked up IronFran at the airport. He was coming down just to cheer us on (note that we cheered him on when he did IMLP last summer).
IronTim and I did the rest of our food shopping at Walmart. I spent the rest of the day as quiet time. Getting my bags sorted and checking in the bike waiting for my family to arrive as their plane was scheduled to land at 5:30pm. Originally I was going to get my own dinner but I decided to go with them so waited a while.
When they landed it was discovered that their luggage was in Orlando. Southwest said they would deliver it the next day to the hotel. My wife explained that there was this race going on and all the roads would be closed. The agent said not to worry since the delivery guy was very resourceful. We had to get dinner quickly and some more supplies (toothpaste,etc) for them at Walgreens and to sleep early. They only had the clothes on their back (and, of course, the text books that they were studying from during the flight).
How resourceful do you think he could be in delivering the luggage at the hotel overlooking transition during an Ironman? Confidence was low.
More to come.......

How crazy is that about the luggage??? Did it make it?

John is super nice! I ran into him too!

Oh, yeah, keep us waiting. Can't you post at least on FB if the luggage arrived? :)

Yea for the race report, boo for the luggage report!

Holy crap lost luggage is the worst! no way the delivery guy was getting through the race traffic. They don't care that much.

Yea it was great getting to hang out with you too brother. We need to do it again sometime. And I might email you about some career advice too.

So I have to wait how long to find out about the luggage?

I hate when luggage goes somewhere without you!

I am taking notes

Wow, I cant even imagine how much stress that added!!!