IMFL: The event itself.

Race day I woke up before my alarm clock went off. I stayed in bed for a while before deciding to get the show on the road. The weather report said that the wind was now from the NW but would change to be from the east at 10-20mph with gusts to 25. At least it wasn't from the south as a north wind normally means calm seas. I put on my tri shorts that I planned on wearing during the swim and then sweats above them. Ate a quick breakfast and since my daughter Amanda was also already up, I asked if she wanted to help me drop off special needs bags and load nutrition on the bike and for T1 and T2. We grabbed the stuff and headed down. I was most concerned about forgetting my orthotics in my sneakers but I realized when I got to my bike to pump up my tires that something was amiss: I didn't have any bottles with me. Duh.
I remembered that the bottles were on the counter awaiting cold water to be added (not with the rest of the pre-race stuff). As we headed back to the condo I was so nervous I felt I was going to puke before the race even started!(No pukie for me though). As we were going upstairs I was patting myself on the back for getting a condo so close to the start. The bottles were where I expected, we filled them and headed back down to transition to put them on the bike.
Rather than get caught up in the nervousness and pre-race hysteria around transition, I went back to the room, rested under the covers a little, put on my wetsuit in the condo (very civilized) and went down to the start at 6:35 with my wife and girls. It was chilly and I jumped in the water just as the announcer was asking for every to get out of the water. I quickly swam about 100 yards and the water was like glass (yea!). I said good bye to my family and entered the corral just as the pro cannon went off.
I didn't expect a fast swim. My PR for a HIM swim was just under 43 minutes so I was expecting somewhere between 1:30 and 1:45. I decided to let the crazies go when the cannon went off and held back about a minute. I swam to the sand bar, walked a bit as it was crowded, and then headed out. I tried to get in a rhythm but there were so many people packed in I was getting hit almost constantly. I would look for a little bit of clear water to avoid the battles but didn't even bother siting since I figured that once the school of swimmers I was in turned it would be right (the lemming theory). When I looked down in the clear water I saw more jellyfish than my earlier swim and a bunch of little rays scooting along the bottom. I was proven correct when I felt the school of triathletes start to turn. I turned then looked for the far turn buoy which was found right into the sun (thank goodness for smoked goggles) so I sighted off the sun. When I got close to the far buoy I saw people were still swimming straight and the kayakeers were yelling at them to turn. I headed back in siting off my hotel not even looking for a buoy once and siting infrequently. I was most proud of that I kept swimming at the sand bar while others were walking and I passed about 30 people just on the sand bar. When I hit the beach and saw 40:5X on my watch, I was ecstatic.

I saw my wife along the chute and yelled sub41! I fought through the crowd at the buffet table (aka water stop for the swim) and back into the drink for lap two. There were no crowds now so I decided to just swim steady. There were more "friends" swimming and then I saw a jelly that looked like this guy. I decided to swim around him rather than get stung. That would hurt for a long time.

At the end of the second lap I did a physical assessment. I swam the swim very easy (per plan). I felt I could do another lap with no problem but had a bike ride to do. Even though I felt my second lap was faster, it was not. My final swim time was 1:25:59. I was way ahead of schedule.

Out of the water, up the beach, got stripped, ran into the parking lot, got my stuff, and headed into the changing room. There was no room anywhere. People where changing in the hallway but the volunteers said there was more room inside. I fought to get inside but it was butt crack to butt crack, not a pleasant sight nor feeling. It took a while to get a few spare inches, dropped my stuff on the floor to stake my claim, put my glasses on and they immediately fogged up. I got dressed. I decided to wear the jacket and not the tights. I wasted a lot of time just getting space to change and was disappointed with my T1 time.
I got my bike with everyone screaming. The first part of the course headed west. Into the wind. My goal was to keep between 160-180 watts. I realized that I could run a little hot into the wind as I should have the wind on the return so I pushed it a little. It seemed like I was fighting the wind the whole first half of the bike. Everyone riding was moping about the wind but I focused on my power, drinking, and eating.. At the first turn around we got some relief and was able to open it up a bit but the wind was shifting. Reloaded nutrition at special needs and I cut the power a little bit to get in my zone. I started feeling hot spots on my feet at about the 100mile mark and realized this could get bad (I had no idea though of how bad). The last leg, that we fought the wind on the way out, we again fought the wind going the other way on the way in. My final average power was 169w with a NP of 179W (aka dialed in), I gained about 15 minutes over my goal and felt good off the bike.
T2 was much less crowded than T1. I got a spot, changed, hit the porta-potty and was out about in the time where I needed to be. It was about 4pm and I knew even if I had to walk I was good on time. I've walked half marathons in 3:40 so double that and I was still good. I decided to walk the first 10 minutes or so to get my legs back and then go into my run/walk plan. I saw my family and saw they were wearing tee shirts with my number on it. I asked if they had it made before they came down and they said that Fran helped get their luggage because amazingly the guy from Southwest couldn't get to the hotel. Fran was a super hero for my family as he schlepped the luggage from one side of the race course to the other for them. Of course, he had to comment why my family packed dead bodies or bricks in the luggage but that is another story.
I settled into my run/walk but my feet started barking. The hot spots that I felt on the bike were now certified blisters. I had most of the marathon to go. I realized this was not going to be pretty. I kept going. IronFran, Deb and Tim's boys were at the 4mile mark. I kept walking. I went through the park and the blisters were getting worse. I kept going. I saw Fran again and asked his medical advice (in real life he is a doctor). I had new socks at run special needs, extra sneakers, I could put body glide on my feet, etc. He said, "Dude, you are going to be an Ironman. You are a monster. Just get it done and worry about it later. You've got this." I told him that was why he wasn't my doctor.
At the halfway mark I decided fresh socks and sneakers was the right way to go. I flopped down and people/medical staff immediately came over to see if I was ok. After I convinced them I was, I had another lap to do. I couldn't help but think that one lap would have been perfect and there will be damage from another lap. I chose damage.
I was limping a bit now but still walking steadily. The people around me were wondering if they were going to make it. Luckily I did the math much earlier when I had a brain so I knew I was ok as long as I kept going at this pace. Fran was still out there waiting for me and walked a bit to help me out. It helped a lot. I kept going. It was now zombie time. Many were limping along. There was carnage. I kept going. Drink the soup. Drink some water. Don't stop. Keep going. Knock off another mile. Keep going. Then we came to the end. I asked the guy next to me if he wanted to go in alone for the video or should I go. He told me to go. I ran it in. My feet hurt. A lot. I am an Ironman. 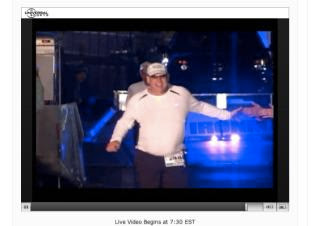 LOVED this race report. Anxious to read the other pieces. Disappointed there aren't more pics. :)

It is official: you are my hero. Great report, thank you. After reading it I realized I just ran out of excuses for not doing my 22mi run today. I needed some inspiration and you have certainly provided it for me.
You rock. :-)

Way to gut it out! How are you progressing this week? I finally feel back to normal today!

Here is my report:

You totally powered through so much!

SUCH an awesome RR!!

I TOTALLY forgot my bottles before mine too!! SUCH a freak-out thing, right? You handled it better than I did. ha ha

UGH. Jellyfish? I read that on a few reports!! YUCK. OUCH. Glad you didn't get stung.

Way to power through!!

That is a good reason to stay that close to the race site. 4:15 am was not a pleasant time to be in Destin.

I'm just glad you made it all the way through the marathon! That sounds really painful, and I had to laugh when you told Fran why he wasn't your doctor. Too funny!

Awesome job on gutting it out with those blisters. I can only imagine how bad they hurt.

In the end you are an Ironman blisters and all!

Your courage in gutting this out is inspiring. Congratulations!

Yikes, your feet had to be killing you! Thanks for all of your support. I appreciate it more then you know. My so called "coach" has not provided me with the insite and support that you have so I appreciate it all the more.( The coach and I are parting ways after this race.)
It was great seeing you cross the finish line!

Awesome! Seriously amazing. You aren't just an ironman, you are a bamf ironman! (I recently had to google to find out what bamf stood for...)