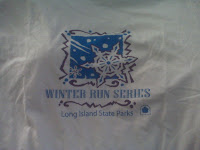 While all racers should know the unwritten rule of "never wear a race shirt until you earn it," many, as exhibited at most local races, do not. With the New York State Parks Winter Run series being the first series that I've signed up for that you only get one shirt for the whole series, I pondered a bit of a protocol question: Do you earn the right to put the shirt on by finishing one of the races or do you have to run 'em all? Not respecting unwritten rules could lead to unimaginable consequences but what if there is some ambiguity?

Even though they handed out the shirt before the first race, I chose the "run 'em all" option. Sunday was the last of the 4 week series with a repeat 5k at Jones Beach. I woke up in the morning with the temperature seemingly being the warmest it has been in months (36F!) but most importantly the wind wasn't that severe. I jokingly thought that I should just wear just shorts and a tee shirt rather than the tights, two layers of thermal shirts and gloves (notice no race tee shirt) that I wound up layering on.

My race overall went well but I went out too hard forgetting that my body still can't run like my mind thinks it can. I was able to realize that, step it back, get under control again with a 30 second walk at about the 2mile mark, and finished in my fastest time of the series. I did wear too many layers and I probably could have gone faster. Anyway, I'll take it.

I originally signed up for the series since my coach felt that it was more likely for me to go outside and run if I signed up beforehand rather than finding reasons to wimp out. Why would this be? I don't know why this is but after I finished the race today on went the race tee like a badge of honor. After all, this shirt was earned and I followed protocol.
Posted by RockStarTri at 1/30/2011 05:09:00 PM

That IS ambiguous, but I think you played it correctly. Good job on the race!

I am so happy you followed protocol! I would have been so disappointed. Plus, I think it's about as bad a bringing the Stanley Cup into the arena before the team who needs that one last win has even won. It's just bad luck. Congrats on earning that shirt!

congrats on finishing the series!

Nice job! I think I'd have waited on the shirt, too.

I find that committing to something definitely makes me get out there. I'm cheap, so once I've paid for something, it'll take an injury (maybe) to keep me away.

Nice job on the series and the protocol! Oh if only my body could/would race like my mind would like it to...

Congrats on being able to wear that shirt the right way!

IMO, this is the equivalent of speaking to a pitcher in the later innings of a no-hitter -- you just don't do it!

Protocol has been met; you have earned the right to wear it proudly!

I participated in a race last year, where you were entered in a draw if you were spotted wearing the race shirt through the finish line, I was NOT IN A MILLION YEARS!

I broke protocol once - it was a point-to-point 5k & parked at the finish, but registered & got the shirt at the start. I didn't want to carry the darn shirt, so I put it on (GASP!!). It was pretty cold, so I stuck another shirt on top so it wouldn't be so blatant.