I had some recovery rides on the calendar Saturday and Sunday. These rides were supposed to be easy rides with the goal of assessing if I'm ready to start the block of serious training leading up to the NYC Olympic tri in a few weeks. I decided to do my ride Saturday old school and dusted off my Lemond Zurich early Saturday morning.

This LeMond was my first grown up bicycle. I bought it as a year end leftover bike many moons ago. It cost more money than I though could be spent on a bike (fear not, my bike spending has been recalibrated over time and I've spent much, much more on a bike). I overspent on purpose to make sure I would have enough guilt to follow through on my vow to complete a century ride with Team in Training. I finished that century and a few more on that bike before I upgraded to a custom Guru (bike porn to be included in a future post). This Lemond has none of the high tech stuff that my other bikes have: no power meter; it is steel (not titanium or carbon); it has a triple chain ring in the front to make pedaling easier; it is very upright to make be super comfortable at the expense of some aero and all that is OK. I normally ride this bike only on rare occasions when I don't want the weather to "ruin" my more expensive bikes or to spend lots of time cleaning them afterwards. I sometimes loan this bike out from time to time for newbies to get a feel for riding a real road bike but I haven't ridden this bike in a few months.

I had no route planned. I just pointed the LeMond into the early morning sun and hoped to explore some neighborhoods in the towns east of my house. It was early, the sun was just rising, the automatic sprinklers were on, and a few people were just waking up by getting the newspapers from their driveways still in their PJs. After I rode a while, it was about time to head home but I really didn't know "specifically" where I was so I just headed towards the west until I recognized some roads. It was about the perfect low to no pressure ride. It was slow but I really didn't care. I was home before 730am.

Sunday was scheduled to be a little longer and a little more serious ride. Fran came over early and I decided to break out the LeMond again. This was supposed to be an easy ride and we kept it easy even when a geezer went by us. Fran and I looked at each other realizing that the thought of toasting the geezer was simultaneously going through both of our heads. We laughed at ourselves, and chuckling Fran said "Down boy." We let the geezer go.

Even though we hit a few "named" hills, it was a fun ride again. During the ride I thought about when, as kids, "riding bikes" could just make the day float along. The act of riding itself was the destination. Not where, nor how hard, nor who we are competing against, nor the time nor speed. These rides on my old bike were more about "riding bikes" than cycling.

Cycling has its place but so does simply riding bikes. I've got to remember that more.

PS: In honor of Big Daddy Diesel awarding me the Pukey award this week, I wore my Republic of Anaerobia jersey Saturday. Their national motto, "Veni Vedi Vomiti," loosely translates into "I came, I saw, I tried to earn the Pukey." 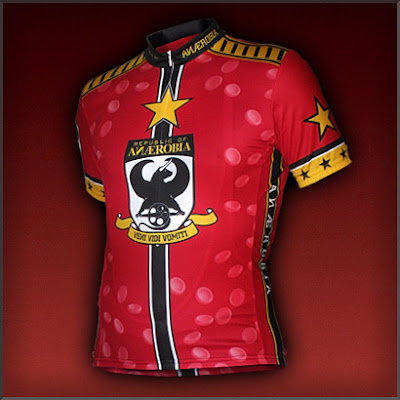 Great post, Rock. You did a nice job of taking me along on a leisurely ride. I liked that you and Fran just smiled about smoking that geezer. "Down Boy" was funny.

hope youre having a great day!

Sweet post - great translation for BDD! I love getting taken on a ride while sitting right here!

cool post. Was very calming to read. Thank you.

Hi Rock Star,
Happy Father's Day to you! I enjoyed reading your post:) Cheers to easy and enjoyable bike rides! Congrats on the pukie award and I love that jersey!

Loved this post. I almost always feel like a kid while riding my bike. The sheer pleasure of riding - just for fun- can't be beat. Makes me feel decades younger :)

Have a great week!

I gotz to get me a bike, just to tool around on. I'd never race - too much trouble. But I rode a mountain bike on a couple easy touring rides at the place we vacationed (in Vermont) last year, and I told Teh 'B. to find me one on freecycle ... but so far, nada.

I may have to break down and spend some $$.

I love that jersey, I might buy it and give it away to the best pukie of the season.