Here is a bullet list of are variety of topics bouncing around my little brain: 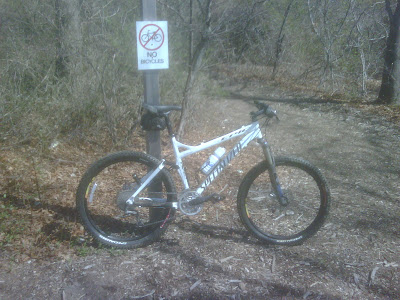 It is rare that biking is still "cool" to kids when they get older.

Nice XC bike! Makes me want to go find a trail! Sounds like you had a good time too.

I love working out to Nickelback... "Burn it to the Ground" is my favorite right now!

I, too, hope you get selected to have your injury repaired.

And yes, as a Tarheel fan, it pains me to see that Duke won last night, but I am happy to see that it wasn't a complete blowout and Butle played hard and well!

Easter candy is the worst for packing on the pounds...at least in my case. Booo-hiss lol.

I hope all goes well with the doctor... and it's cool to go mountain biking, and I'm glad your daughter and her friend still realize it!

I had underwater swim film analysis done before. Once I got past the weirdness of watching myself swimming, it was very insightful.

I love it when you post random stuff:) Way to get out on the bike!! I love Nickleback too!

Nickelback rocks! I don't listen to music while I run, but enjoy them at other times.
Glad to hear the candies are gone. Nutrition can get back to normal.

Is that your bike beside the "no bikes" sign? Did you ride in any way?

We still have some of that candy lurking.

thanks for reminding me...