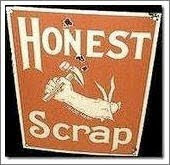 TriMommy from Going the Distance has bestowed upon me the "Honest Scrap" award. What this means, I really don't know, but I think I'm supposed to share some "honest" things to the blogosphere. Most of what I share on my blog is "honest" but occasionally some sarcasm (ok, maybe a little more than occasionally) sneaks through. So I had to think about what would qualify as "honest scrap" and decided that things that are confirmable "facts" or historical "events" don't make the cut in and of themselves. That left that I would focus on my beliefs and thoughts processes. Hope you enjoy!

I'm not big on bestowing these things/obligations on others but feel free to pick up the challenge without the feeling of being picked on should you find this interesting. I do find it fun to see about how people do something as open ended as this (maybe that's something else I should have added to the list).

I spent several years dealing with knee issues and other related problems. Now that I have that behind me, I'm amazed at how GOOD I feel. So I'm thinking the answer is NO, everyone DOES NOT have aches and pains

p.s. I rarely sleep through the night either. :-(

We should start a middle of the night support group. I am the same way!

Be proud of your injuries...you're still so much healthier than before. Guys on couches don't get sports injuries!

Have a great weekend, Rock.

Interesting stuff. I was thinking about work persona vs private persona vs work persona. I think mine are all the same, but I have often wondered about the bloggers that I follow. Since I carry a mental picture of each of them, how would that hold up if I met them in person? I am going to meet one of the bloggers I follow in several weeks at the Little Red Riding Hood Bike Ride and it will be intersting to see.

And I 'picture' you as gregarious, determined, competitive ans warm hearted. How does that sound?

I don't sleep through the night either! A middle of the night support group sounds pretty good :)

I think in many ways I'm the diametrical opposite of you, but which one of me? Because I agree: I am totally different here, in the blogosphere, than I am at home; and I'm different again at work.

I'm different yet again in other milieus.

Man, maybe I have a personality disorder. But which one of me?

Random stuff....excellent!! You know how much I like the random good to know stuff:)

I sometimes have problems sleeping at night too! I hate it because I feel tired alot...running helps with this.

I think that it is great that you feel that you are fortunate to have a good life:)Isn't that what we all want..to feel happy about what we are doing! I think the tough parts have a purpose and help us with the good:) Great post! Enjoy the rest of your weekend!