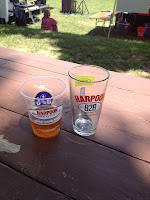 Yesterday I started the Harpoon Brewery to Brewery ride, a 148 mile bicycle ride from the Harpoon Brewery in Boston to the Harpoon Brewery in Vermont. I did not have a good day and decided to end my riding at the first rest stop. Even though the day wasn't what I expected, I think I made the right, but hard, choice. First a little back story.
I wasn't all that comfortable going into this ride for a variety of reasons listed in the last post. Just as I was getting ready to leave for Boston, the bike shop called to let me know that the replacement power meter came in. I stopped by and they put on the replacement. Quarq used to be one of the best companies to work with (unfortunately I've had a few issues) but in this case they were slower and less responsive initially than in the past. Hope it isn't SRAM (who bought Quarq recently) taking over and ruining something good but we'll see.
It isn't hard to get to Boston from New York. On a trip like this we normally take my wife's minivan but the day we were leaving, it too started acting up so we dropped it off at the dealer. We took my car but my wife wasn't comfortable with the GPS. She was planning on riding along the bike ride route and meet me at the end. This way we would stay in Vermont a night and head back home from there. We put the address of the Boston hotel in the GPS and off we went.
Unfortunately we hit Boston right about 5PM on Friday night. Traffic was not cooperating. To complicate this even more, the GPS brought us to the wrong location. Apparently there are 2 Mt Vernon Streets in Boston, 10 miles apart, and we went to the one that was a house, not the one that was a hotel. This cost us an hour with the traffic.
Packet pickup was uneventful but we needed to get some food in fast as I wanted to get to sleep early. We couldn't find an easy place but finally found an Applebees. Back to the hotel, set up the bike, try on the jersey (it was too small), and under the covers to sleep.
I woke up at 3:43AM on my own. The clock was set for 3:45. Took a shower, packed up the room, got my food ready for the day, and headed over to the ride start. The start was organized with the cyclists queueing up. I got in line. The system was to take 25 rides off the front of the line into a corral and let them go every 5 minutes. The first group was off at 5:15. My group was off at 5:30.
When the riders registered for this ride, it was required to put an estimated pace. The slowest allowable pace was averaging 16mph an hour. That's what I put in and what everyone who was on line at 5:15 should have been. The 17mph crew was to start at 6:00. Faster riders were supposed to be even later. My random 25 people in my group apparently didn't get that memo as we started flying through downtown Boston.
I thought the pace a little hot but hung with the group. 4.5 miles into the ride we caught the group ahead of us. I felt a little better because this was evidence that we were flying. My breathing was off and I was coughing when I tried to breathe deeply. The two groups joined together and the pace kept hot. We caught the second group ahead at 8.75 miles. Now the group was very large and feeding off itself. I realized that this pace would crush me so I fell off the back and dialed the effort down. If I pushed my effort too hard, I would start coughing.
There was an unofficial port-o-potty stop at 16 miles or so in. I hooked up with some folks after that but the hills would make be cough more so I kept dialing it back. I realized I wasn't having fun and my wife was waiting at the 48 mile rest stop. I pulled into the stop, told her I was done, and put the bike in the back of the car. I knew I could have gone further but the whole 148 was probably a reach. Going further, though, would have shredded my body. Cutting at 48 miles let me get a good workout but not have to recover for an extended period. I thought it a wise choice.
She asked what I wanted to do and we decided to drive to the finish. The finish, though, was two states away and about 100 miles so it took a while. We stopped for lunch and beat all the riders to the brewery. I got a beer. The picture shows it only 1/3 full - I thought it symbolic given how much of the ride I did - but they gave me a full beer. We decided to heads towards home rather than stay in Vermont. We wound up driving the whole way home with a break for dinner. I was exhausted more from 7 hours driving than 3 hours riding.
I realized that this was the wrong ride for me given my fitness, my body composition and the lack of hill training that I've done. I did some long rides but need to actually follow my training plan closer. I liked the ride organization and might consider doing it again for revenge in the future. I used my performance in this ride as a reason to validate which races I'm doing and why. This will probably result in an "adjustment" to the race calendar but I think it will be for the better.
I'm still coughing today, perhaps even more than yesterday. I'd rather not have to see the doctor but may have to if this doesn't clear. Wasn't the day or ride was I was hoping for but overall a decent day.
Posted by RockStarTri at 6/17/2012 03:00:00 PM

REally cool that your wife goes along for the adventures with you. I've said more than once that I'd rather ride my bike for 8 hours than drive for 8 hours.

It was good that you were being realistic. I mean, many times we hate to stop, but honestly, this is about you and unless you are an elite athlete, there is really no reason to push it. As I get older (and slower) I have come to realize that I do this for me and my health and I am not out to impress anyone else. Besides... 148 miles is daunting. Maybe next year?

Listening to your body is never a bad thing. And 48 miles is still a decent ride!

Sounds like you made the right call. Definitely a smart move.

I agree, as much as it sucks, you were wise to stop when you did. Hope you're feeling better!

I've had to make several similar choices this year and they are the hardest, but by far the smartest. That ride is definitely on my list of rides to do! It will be there next year for you to try again!