I fell off the diet wagon with a loud thump while vacationing at Disney last week. I'm back on track this week understanding that last week was only a small bump in the fitness road and that body composition is a long term journey for me. Healthy eating has returned to the menu and the palate is readjusting. The scale wasn't a wonderful experience this week but I got on it anyway.

On related news, I had issues even walking during my trip due to my injuries (prior to Monday's shot). The pain in my hip and knee altered my walking gait which caused my calf and hamstring to complain. Even so, we walked a lot. To get a sense of how much we walked, one day my daughter wore the Garmin 305 that she "stole" from me (I doubt I'll ever get it back now that she is into running) while we went to MGM. She turned it off after it already said we had 5 miles covered before lunch time knowing that MGM is the most compact park at Disney with the least amount of walking. 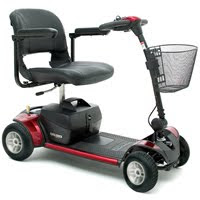 I did have a visual at Disney's Animal Kingdom that I'm using to motive me. It was a vacationing family on scooters, multiple scooters. Not one parent in a scooter but each had their own. Their only apparent handicap was fatness. What made this extra special is that the 300+ pound mom had the 200 pound 10 year old or so son asleep on her lap while she drove behind the husband . The husband's job seem to be shouting at the people walking to get out of the way since, after all, they were on scooters. The poor 13 year old or so daughter (who was only mildly overweight) was walking behind the caravan with a pout on her face (maybe because she couldn't ride or maybe because she couldn't understand why the rest of the family was - unfortunately I think it was the former). The only thing that could have made this worse was if the father was hitting the people in his way with a half eaten turkey leg so he could drop the hammer on the scooter and get it up to 4mph.

I realize that some people have legitimate need for a scooter but I never considered one even at my heaviest. Please do me a favor though. If you ever see me in one, please publicly flog me. Or tie me to the back of the scooter and drag me around an amusement park. Not a small one like MGM but one on the scale of EPCOT. Beat me about the head with a half eaten turkey leg if one is available or....you get the picture.

Hey, I get motivation from strange sources. It may not be politically correct but I don't care as long as it works.

The sight you described at MGM with the Scooters is one that makes me want to cry. It's one thing for an adult to have obesity issues, but when children are obese it makes me want DFACS to come in and take the child away from the parents because they're obviously doing alot of damage to that child physically and emotionally. And as someone who struggles with weight issues as well, I don't say it lightly.

I'm sorry to hear about your leg giving you such problems and hope it gets better, and fast!

Sorry that injury is complicating other parts of your body. That's how it goes though, and why we need to rest when something is healing.

Oddly, teh family in the scooter would probably have been better off walking. The scooter gives more reason to avoid exercise...

as for falling off the diet wagon, it's a new day. and it's never too late to become what you always wanted. plus, we all slip. we're human. you're doing a bang up job!

I'm glad you have such a positive attitude about the scale this week. Vacation is definitely a time to cut back and enjoy life a little bit, even if it means overindulging. You're right though, it's just a blip on the fitness radar.

It's as good of a reason as any to have extra motivation. Time on vacation is fine to indulge - the important thing is that you're back at it now!

This entry totally cracks me up. I shudder to think of you on a scooter. How about riding your bike around Disney next time? How many laps could you get in? Maybe you could make it time trial day - Mrs. Rockstar and the girls get to do one ride for x amount of laps around the park. I think this could be a new training style for you. How 'bout it Joe?

That's a pretty disturbing picture you just painted there. Obese children make me sad. Their parents just piss me off.

I hereby solemnly promise to abuse you with a turkey leg if you ever go to the dark side.

Yes...I'm in also. I'll beat you with that turkey leg if you post that you are at the scooter rental place.

We went to Disneyland, CA a year ago and walked so much(there are five in our family). We hit the park early and would criss-cross throughout the day, until it closed at night. By Day 4, several of us were either sore or limping! Crazy, but fun.

Wow, that is a really sad story. It just really highlights the obesity epidemic. So, so sad.

They have scooters now? When I went in 2002 everyone was in wheelchairs with Disney pushing them. It seemed most "disabilities" were too obese.