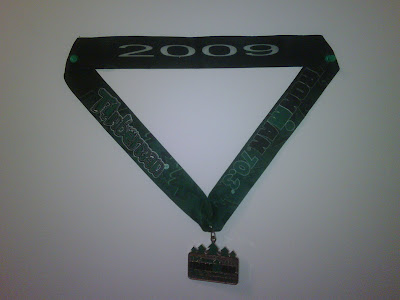 This could also be titled "I had a bad day but it could have been worse." I'm not going to go into the specifics on this post as my experiences last weekend and the lessons that I'm still sorting out in my head will be blog fodder for the next few weeks.

Weather was questionable the whole week leading up to the race with rain most days and violent thunder storms most. However, there was extended periods of decent weather and the hope was to get the race in between the storms. Race morning's weather looked fine, humid but not raining. We thought we caught a weather break.

The race start was delayed about 30 minutes as there was a car accident out on the course. This accident pulled most of the police that were scheduled to support the race with traffic duty so the whole field waited until this was cleared.

Once in the water, I had a decent swim for me. The water temperature was announced as 75 degrees so wetsuits were in order. My time (43:53) and pace (2:04/100y) was right about where it should have been (even though I wished it was a little quicker). Just a little slower than Eagleman but in very different conditions. I felt I needed to improve on drafting but coming out of the water was content.

Timberman was my first experience with wetsuit strippers. I pulled down my wetsuit, flopped on my back, the stripper ripped off the wetsuit in about 2 seconds, and then my right hamstring locked up in a cramp and wouldn't unlock. I almost couldn't get up and when I did, I couldn't unlock the muscle. I limped in the rest of transition trying to loosen it up unsuccessfully but just as I was getting on the bike, it freed up. I thought this an odd sign but it was nothing compared to what would happen next.

I consider the bike my strength. Timberman has a very challenging (that means hilly in rockstar-ese) course and the plan was to keep the power under control (210-220watts) to save myself for the run. I was pushing it a bit harder than the plan but didn't seem to be getting the speed I would normally expect. At the 30mile mark my average power was at exactly 220w but I made a choice to step it down a bit. I knew I wouldn't hit my time goals but my true goal for this race was how well I did on the run.

I felt I was eating and drinking enough but my left quad started cramping at about the 40 mile mark. I got off the bike on one of the hills to try to loosen it up and found I couldn't even walk up the hill due to the cramp. I got back on the bike and limped it in.

Something was very wrong. Maybe it was me. Maybe I went out too hard on the hills. Maybe I failed nutrition. Maybe I failed hydration. Maybe the course was too much for me at this weight. Maybe it was the humidity or the wind or the sun. Maybe something was off with the bike. My power seemed fine ( it finished at an average of 207w/NP220w as compared to Eagleman of 192w/NP197w) but with the cramps and the slow speed I was very confused.

Here is where the choice of the day was made. I thought about not going out on the run and going straight into the medical tent. I could barely walk as I was limping due to the cramps. The word which kept jumping into my brain to describe my legs was "shredded."

It would have been easy to stop but I decided to finish if I could. I realized I might not make the cutoff. I realized I probably couldn't run so I started limping and walking, eating Tums and Endurolytes to help with the cramps, drinking everything in sight. My quads would cramp on the uphills and my hamstring on the downhills. Of course, this had to be on course where they said only 20% was not uphill or downhill. My legs loosened up a bit and I would run a little until they tightened back up.

Fran and Tim came out on the course to help run me in. I will never forget that and how they helped me.

It took me a while but I finished the race. 7 hours, 53 minutes, and 22 seconds. I made the time cutoff. I got my finisher's medal, towel and water bottle. I sat in the lake for a while to have it help cool off my legs. Only then did it start to rain.