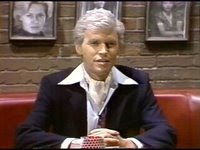 In Randy Pausch's book, "The Last Lecture, " he wrote about choices in words for people to say certain things that make the message positive and he referenced Disney employees among the master of this skill. As an example he cited was that if a DisneyWorld employee is asked when the park will CLOSE, they will answer that the park will remain OPEN until 9PM. This is something that Disney trains their folks for and it help reinforce positive messages associated with that "magical" place.

Recently I've had a lot of people commenting on my physical transformation even though I still consider myself fat and not all that transformed. I have 25 pounds (or more) to go and still view myself when I line up against "real" athletes as someone who doesn't belong. The evidence and feedback that the scale provides on a daily basis reinforces that fact. But in the spirit of being positive, I've taken some comments I've gotten and flipped them a bit using Randy's logic (sort of) :

I don't think that I quite caught the essence of Pausch's point here (I'm not nor ever have been a Disney employee) but another take on this theme could be Fernando, pictured above as played by Billy Crystal, who often uttered "It's better to look good than to feel good" and "you look mahvelous." On the triathlon road, feeling good and feeling strong are much more important than looking good (although there may be something to why when some clydesdales enter the water in wetsuits, including some rockstars like yours truly, "fans" mention under their breath that beached whales and hippos must be more graceful in the water but that is a story for a different blog or a different day). More important for triathlons than how one looks, though, is how fast one actually is (or is not).

Last year at StAnthony's triathlon, I swam in 38:05, rode in 1:28:53, and "ran" in 1:29:01 for a total time of 3:44:57. This year I would be disappointed if any of those splits are slower. In fact, I expect to take a lot of time out of last year's performance with the normal act of God types of caveats on conditions. What is a lot of time? This question has been varying in my mind each day and I expect this waffling/yo-yo-ing to continue right until race time but hope to feel mahvelous during and immediately after the race and save the looking mahvelous, as best I can, for the victory party Sunday night.

Another step on the road to EagleDay.