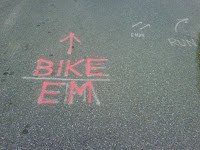 This weekend the family and I took a trip down to Cambridge, MD to preview the Eaglecourse and to better understand the lay of the land. Actually I went down there to do this and they came along to keep me company.

The weather forecast called for rain and more rain but there was a glimmer of hope as to when it would start. We got in about midnight after our long ride and I had a decision to make: do I get up early and do this ride sleepy or do I wake up on the natural rise and risk getting wet. I chose to take the risk.
When I woke up it wasn't raining. I got everything ready and the wheels were rolling at about 9. Unfortunately, the hotel was a little longer from the start than I expected (about 5m rather than the 1/4 inch on the map) but I stopped at a store and loaded up a bottle of Gatorade and water (in addition to my 6 gels and 2 bars). I found the start and looked over the calm Choptank (completely against reputation) and started the ride. I expected to keep about 200w and see what the wind brought (even though there seemed little wind at the start).
The wind kicked up a few minutes into the ride and the ride itself was fairly uneventful except for the 5 mile stretch of road work that made riding a bike like holding a jack hammer. Of course the wind played a part but I gained a new respect for long straight aways going 12 mph into the wind.

Not counting the time I took to reload the hydration, I did the course in about 3:20 holding average power of 187w (NP of 193w) on the first 42 miles and average 180w (NP 190w) on the rest. This was a little lower than I expected and I'm blaming some on the road work but at least gave me a data point to baseline.

It also renewed my respect for the wind.