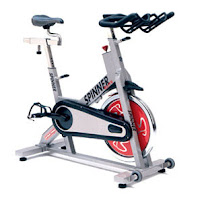 I've been getting upset with my lack of physical activity lately. My wife commented to me that if my blog has turned into complaining about football and hockey then something needs to be fixed. She offered to do whatever she could to help me out.

The problem with exercising with your spouse is if you are at very different skill levels. My wife plays tennis. I do not. When I try, I break myself. I did triathlon stuff. She did some. There was a time when she was cycling to prepare for a bike tour that we took in Napa Valley but that was a while ago. When we rode we rode at very different paces. It made training together difficult. Forget about having to have one to chase on some kid activity.

My kids said that their practices started at 10AM on Saturday. I decided to see if we could do a spin class at 8 to be home in time to start the carpools going in time. There was space available and I booked two bikes. The girl answering the phone asked if I had ever been there before since I wasn't in the computer. I explained the last spin class I took at the spin studio had to be about a gazillion years ago. Maybe it was 2 gazillion years ago.

When we told the kids what we were planning, my oldest said she remembered she was wrong about the start of her XC practice. It started at 9 instead of 10. We told her to get her own ride. She put on a pout face but was able to get a ride. We did have to drive someone home from practice but that would work.

I was wondering how cycling shorts would feel expecting the worst. It is great that these shorts stretch a bit. The bigger challenge wound up being finding my mountain biking shoes for SPD spin class. It took a while but I eventually found the right shoes.

On the way to the studio my wife commented that she viewed this as a date and it was frightening how our dates had changed over the years. When we got there the leader recognized me and commented it had been a long time. My coach does not believe in spin classes as he feels you can get more out of a target power workout. I generally agree with him as the power file analysis that I've done with these classes show the level of effort typically lower than a stand alone but my fitness level is so low I figured that anything is better than nothing.

The class was fine even though I started looking at my watch 20 minutes in to see when it would end. My breathing held up. I didn't wear a HRM as I didn't want to focus on that too much and just wanted to finish the class. I started remembering what it must feel like to ride a bike. When the said to make the effort harder, I reflexively started shifting like I had a STI shifter. That didn't work (hey moron you are on a spin bike) but I'm still glad we went. I finished strong and thought maybe my fitness wasn't as bad as I thought.

I think I need more social exercising to get me back on track. This spin class worked so we need to do it again. Having the company to do it was great.

It's a good start. My husband has been coming running with me sometimes, but he's way less committed than I am to getting out several times a week. Whatever; on the days he doesn't make it, I still have a nice run by myself, and when he does get out there, it pushes me because he's faster than I am. Plus, the company is good.

Great job getting back out there and exercising. My wife started running and we have diffucult time deciding who is running when. My wife is supportive of me and often reminds me when I sleep in that the guy finishing ahead of me got up and ran that morning!!

A ROCKSTAR is reborn

and thank you for coming back to for your comment
I do appreciate this a lot
I know you are right...

Awesome that your wife views going to workouts as a date! I gave up trying to have my wife do any sort of tri related exercise with me.

Hey - something is definitely better than nothing. Glad you had a good outing with the wife even if a bit lame for a date. Do something appropriately better for the next date, but still get in a workout. :)

Your wife's support is really cool, especially given the fact that your IM training has taken huge time away from your family (and I'm totally not saying that as a criticism, more recognizing how my own husband would look at the time necessary for that training load). Working out together is pretty great, especially in a class situation given the differences in your speed on the bike. This way, no matter how fast you ride, you're still together. :)

Haha great 'date'! I haven't been to a spin class since last spring. Can't stand being inside when i dan ride outside. That said, the instructor pushes me more than i would do on my own.