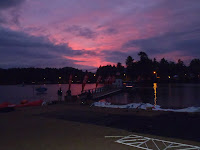 Last weekend my wife and I traveled north to Lake Placid to cheer on my friend Fran who was competing in Ironman Lake Placid while using the opportunity to get some training in beforehand. I saw someone wearing a shirt with the title of this blog post and as the weekend continued realized that for many, this comment applied.
Being at an Ironman is a very unique experience. The air seems to get more charged as the week progresses and Lake Placid turned into the epicenter of the triathlon universe. There are athletes, training and not training, everywhere. We arrived on Thursday afternoon and the heat wave was in full force.
I had a swim on my schedule for Thursday after the drive. I was a little nervous that the rest of my friends weren't showing up until Friday so I'd probably be swimming alone. That fear went away as I walked the short distance to the official swim start and saw hundreds of triathletes swimming. The traditional Lake Placid buoys were out, not the ones marking the ironman course so I decided to basically swim the length of the lake and back. Mirror Lake is home to fast swims but my time for the lap at 50 minutes was a lot slower than a lap should be for me (realistically about 40 minutes these days with the effort that I put in). I felt fast so guessed that the course I swam was not the ironman course (someone later told me that the course was setup for kayak races held previously).
My wife and I grabbed dinner and ran into Mandy. My wife saw her at the swim earlier but Mandy was on her way to meet some other bloggers, Jon and Jason, who were racing with her. I haven't met many bloggers in real life but it was a great experience spending a short time with them. Wish there were different circumstances where we could sit down and talk for a longer time. I think my wish will come true one day.
Friday had me doing 3x30 minute bike intervals at a high effort. I decided to go and ride a part of the course and ride up the famous 6 mile downhill into Keene. It was hot. It was windy. I did the first two intervals and realized I was out of fluid. With the 25-30 mph wind shooting down from Placid to Keene I realized that I wasn't going to make it back. I decided to go back down the hill to Keene, reload on water, and call my wife to rescue me.
That plan failed since there was no cell service in Keene. I decided to ride the course to Upper Jay to see if there was service there. No go. I continued on until Jay, still no service. I saw a bike rider on the side of the road and asked to borrow their phone since she had service. I got my wife and asked her to meet me in Wilmington for lunch. I just needed to ride the 5 miles of hills to get there so I did. My phone worked in Wilmington and my ride netted out to 3200 ft of climbing per Garmin in 37 miles.
The next day had a full loop+ of the course but Fran wanted us to join him on a shake down swim. A quick 25 minute hop in the lake with him got that done and Tim and I were off to ride. If anything the wind and heat were worse. There were more riders riding but there were multiple accidents along the way. I had to stop multiple times to reload on fluid and to try to escape the heat. It was a miserable, humiliating ride with the wind in our face as we climbed the whole 17 miles in to Placid. I only did one loop but if I had to race that day I doubt I would have made the cutoff. I was genuinely worried for the racers the next day.
My friend Mel was in charge of volunteer security and she asked if my wife and I could help out. Since we were just going to be watching the race anyway we volunteered. We got up at 5am and the heat and wind seemed gone (later I heard the head wind up the hills turned into a slight tail wind, yea!) Being security got us in behind many of the ropes but my job was to make sure only athletes entered the starting area. Sound easy, right? The reality was that it was a stressful job but this is one of the few times where my size helped in the world of triathlons.
I'll let you read the athletes accounts for their day. We ran from point to point cheering on anyone we recognized. At the end of the day we were toasted and we didn't even race! There were so many successes and people "doing epic shit" that I will remember that weekend for a very long time. Kudos to Fran, Mandy, Jason, and Jon on finishing their races: You are all rock stars! 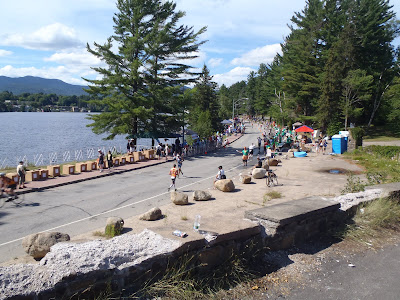 Some epic shit was going on for sure!

That is a cool shirt!

Great blog title and a really cool theme for a shirt.

Being at an Ironman event is better than any sports event I have ever been to and that includes playoff baseball and football and world cup hockey and international soccer matches.

It is epic shit.

Sounds like an amazing weekend. Glad the weather cooperated a little better on race day.

I'd love to go see an Ironman race!
I just finished Matt Long's book and Lake Placid was the race where he became an Ironman the 1st time and again after his terrible accident...people who can do that impress me so much.

this is a very cool shirt!

awesome-ness.
We are hoping to go and cheer our coach on for Ironman Arizona and I am seriously excited.

I can not imagine working security at an event with everyone being Type A personalities, that had to be part of the challenge

I like the theme and you were epic on that climbing ride.

So awesome to see you guys as always!! Thanks for cheering me on!

Your comment on my Blog cracked me up. Very cool you got to meet Mandy. She is one of my favorites. She seems so sweet.

The title of your post is Epic. Love it.

Yeah, I once rode fifteen miles in the wrong direction with a friend, only to figure out "...hey... I don't think we're going the right way." NO cells. Had to ride 30 miles back the other way.

Well, it makes us stronger, or something, right?

Glad you had fun in Placid.

awesome to see you on the course. You were in a key area (This hill) which was very motivating to hear you call out our names! Thanks for the support and cheering!!!!