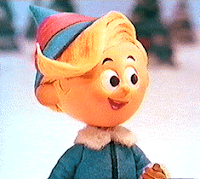 "Gather around children and I'll tell you a tale. A tale of an elf named Hermey who wanted to become a dentist......." At this point almost every child in the United States (and most adults as well) would interrupt and ask "isn't he from Rudolph?"

Sigh. I won't go into the marketing aspects of Christmas cartoon characters but I'm sure at least one MBA has written some opus on that as part of their degree or thesis (my MBA being from a somewhat lower end school didn't require some of that nonsense l and I think that the statute of limitations for school things has kicked in anyway since it has been so long since I got that piece of parchment but I digress).

But I do have a lesson for the next generation and they can learn from my misadventures. I decided to "clean out" my stash of old nutrition bars. I had a collection of Clif bars, Power bars, Mojo Bars, etc. Rather than throwing them out (which would have been wise), I decided to have them as snacks. All was good until I bit into a petrified Power Bar. This bar broke one of my back teeth (aka molar). It is the first broken tooth that I've had since I was a kid.

But it didn't hurt.

I went to my dentist (not Hermey) and she gasped in horror (just kidding) and said based on how it broke I had to go to the oral surgeon for some "gum work." After multiple trips with the oral surgeon, my tooth was ready for a temporary crown.

Luckily it still didn't hurt. The dentist decided to go with Plan B do a filling type of deal with it. That work was done and I went home hoping to forget this (I previously wised up and threw out the remaining bars).

Then it started to hurt. A lot. Back to the dentist and she then said Plan B didn't work so back to plan A with a crown but this time I need root canal. Hermey yanked out the teeth of the Abonimable, right? So I asked if she could just yank it out and she said that was a bad idea.

Today is my second session of root canal. It still hurts. Adventures in dentistry continues but they say it will stop hurting soon. I don't expect this to be finished for a while with the holidays in between. I hope I learned a lesson on eating petrified Power Bars. You never can tell with me.

I wonder if Hermey would have done it differently. Maybe yes, maybe no, but then I remembered the most important lesson from the Rudolph cartoon: Bumbles bounce.
Posted by RockStarTri at 12/20/2010 10:59:00 AM

yikes. i needed a root canal after a crown a few years ago and it was a couple weeks of bad stuff. finally it stopped hurting.

oh no! Dental issues are no fun at all! I hope the pain doesn't last through the holidays and you're feeling better soon!

That ain't good. Hope it starts to feel better soon.

And thanks for the lesson....that Marathon Bar that has been asking me to eat it is now going in the garbage. Thanks.

Oh no! And right thru the holidays too. I guess it's a good thing your dentist isn't off on some tropical isle.

Bummer about the tooth, feel better soon. Sounds like things went well as far as fixing it though.

How bad is it that when I read the blog title in my cue (without the picture, mind you) I knew exactly who Hermey was?

bleh ! hate the dentist. Nothing personal. Other than cleanings, I love them.

I broke my tooth on bubble tea. Yes, bubble tea. But fortunately I didn't need a root canal - just the crown.

Good luck getting all that squared away.

We all know the same demons! Advice to all: be VERY careful when biting into very old ShotBloks.

I heard that brandy can help one get through dentistry problems!

Were you at least able to put the broken tooth under the pillow and get some coin for it?

That sounds terrible.
I have not been to the dentist in twelve and a half years...because of stories like this. (Yes. I am Southern..wanna make something of it.)
I vow not to eat anything firmer than jello until I forget this story.

I hope you get better soon.