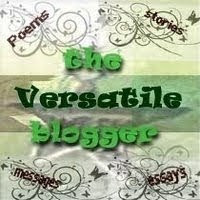 One Crazy Penguin tagged me with the Versatile Blogger Award. Thanks OCP! I've done some similar types of posts in the past but since it has been a while I decided to play along. So without further ado:

The rules are that I need to:

* Thank and link back to the person who gave you the award - Done!

Now I'm supposed to pass this challenge/award forward. An interesting thing would be to tag the people who are new to following my blog so I can learn a little about you. Another would be for the long time followers to play along. I guess what this means is that this is a self select challenge: If you want to, go for it!

Ha, ha, ha! #9 is my favorite!
Good luck with tennis. That's a sport that is waaaaay beyond my skill set.

Two things I lost when I moved from Boston via NYC to California. A tolerance to cold weather and the ability to parallel park.

Hi Rock Star,
I loved this! Oh hell, I love random stuff....you already know this about me:) I have worse eyesight than you...I promise! Lasix is for people with okay eyesight, not for me! My doctor advised me not to have it done. She scared the crap out of me and made me nervous about being worse off than what I already am:)

You are obviously well connected-2 b-berry's, i love it! I would say that the bberry is superior to the iphone anyday. Good luck with the tennis! Be careful with your knees.
I had to learn to parallel park for my drivers license test when i was 16 and i could probably count on one hand how many times i've had to parallel park. I've been driving for 24 years now...LOL! Why did i just do that math? Now i feel really old.

I am addicted to my crackberry

I dont know what sport is tougher, tennis or golf, I suck at both

I'll play. Go to "lets do this again"

34 years in NY and parallel parking all the time. 3 years in Dallas and have had to do it.....NEVER....It is still a great skill to have.

I tell my wife all the time that my as Jay-Z says blueberry is so much better then that iPhone thing....

I am going to take you up on this tomorrow with a blog post and will refer it back to you.

I love this stuff.

As far as the writing goes, the more you do, the better you become.

My wife has asked me if I would take up tango, or ballroom dancing with her. When I asked her "Seriously, does anyone want to see ME in tights?" She said, "you race with those wrestling uniforms on, why do you care?" Ah... wives.

I can appreciate #6 - I have an iPhone and BB, and BB is far more useful for sms's, emails, texting.

iPhone is more for games and stuff but not really all that useful ... and know one is going to convince me otherwise.

8 and 9 are wonderfully in character!