The Road to Average 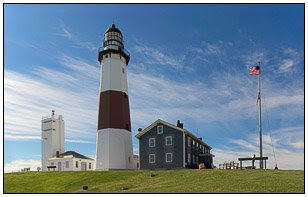 On Sunday, July 19, 2009 I raced the Montauk Lighthouse Sprint Triathlon and it made me rethink how I rate my race performance in triathlons. I thought the path on improvement had plateaus along the way and I thought the first one was "not sucking." After I reached that plateau I could set my sights on the next plateau which would be "average."

Although I had high hopes for the bike, I didn't reach the non-sucking plateau during this race. While my bike computer showed that my speed averaged 19.2mph, the "official" race results showed my time to be slightly slower at 18.7mph. My swim was 26:01 (3:09min/100yards). My run was 33:56 for a 10:57 min/mile pace. This run time was by far the fastest that I've run as part of a triathlon and in fact was my fourth fastest 5k ever.

I was happy with my performance, especially the run, but then I heard the usual post race grumbling from the other racers. The grumbling had to do with the current (realizing that nobody ever grumbles with the current at the swimmer's back) and the deceptive chop (also realizing I need more open water salt water swims). It was also the most violent open water swim, for me, that I can recall as I got physically beat up. I didn't know how accurate the distance was either so my swim time, even though much longer than expected, didn't bother me in and of itself. I felt I was close to where I needed to be on the bike since the course was hillier than I envisioned.

Then I took a closer look at the numbers.

This race had an elite swim wave. In order to be in the elite wave, racers needed to be able to swim a half mile in under 13:00. Nobody did. Mmmmm - maybe there was a point to the grumbling.

All of these "placings" were much higher than my previous race performances in relation to others. We don't need to discuss transition times here but I found out that people actually run during transitions - who would have thunk it?

I was above average on the bike yet I still didn't hit the non-sucking plateau. I was close to average on the swim and had one of my better runs. Maybe I need to pay more attention to "the road to average." Wonder what the next plateau is after I hit average?
Posted by RockStarTri at 7/20/2009 08:51:00 AM

I know I'm writing more about the "median" and not the true "mean" as "average" but it still tells a story.