Forty years ago next week on July 20, 1969, Neil Armstrong of Apollo 11 became the first man to walk on the moon. Eleven men followed him with the last man to be on the moon being Gene Cernan of Apollo 17 . Apollo 17 left a plaque on the ladder which read "Here Man completed his first explorations of the moon. December 1972 AD. May the spirit of peace in which we came be reflected in the lives of all mankind."

Most people are celebrating this anniversary remembering one of the finest examples of engineering, project management, and project execution ever attempted. I vaguely remember watching one of the subsequent lunar landings in the elementary school gym with the whole school looking at a very small black and white television.

Yet, this anniversary makes me sad. Since Apollo 17 no one has walked on the moon. In fact, no one has even attempted it since then.

Neil Armstrong is currently 78 years old. Gene Cernan is 75 years old. Three of the twelve astronauts that have actually walked on the moon have died. I'm sure you realize that while the astronauts might be the most recognizable faces of the space program, they were not the only ones involved. There were teams of people that figured out how to get it done and got it done. Lots of lessons learned and ideas that were considered but not chosen. Some of these smart people have died. Other are getting on in years.

Where is this knowledge today? While some was written down, I'm sure some is gone forever. This anniversary made me realize this loss. Our current generation doesn't even know what was lost.

Sorry for the bummer soapbox speech but I'm sure that if you show the picture below to someone of my generation, many will immediately identify it as something to do with space. They might not know it as the Lunar Excursion Module (LEM) but they will say it had something to do with landing on the moon. If you show it to most kids of our next generation, they will immediately identify it as Lego. 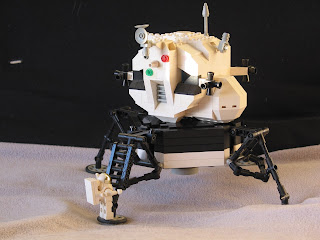