Hardware in the house. 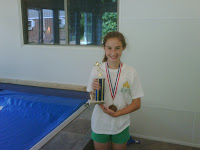 Normally in a day which started with my second fastest 5k ever (in 31:42 for a 10:13/mile pace), I would be remembering the race and let that positively influence my attitude for the rest of my day. Today, though, Amanda trumped that on all levels and that had a bigger positive influence on the rest of my day.

First a little back story. A few weeks ago Amanda decided to see if she could qualify for the high school cross country team in the fall. Her middle school doesn't have a team so the only option is the high school team. Since she is only just finishing 7th grade, she had to do all sorts of qualifying athletic tests to even be considered. These tests included sit ups, broad jump, shuttle run, 50 yard dash, and 1.5 mile run.

She passed them all but she needed to find a 5K before she went off to sleep away camp to see what her current abilities actually are (she doesn't do any specific run training but the rest of her activities get her running at times). Her 5k PR was 27:23 but it was set in December of 2006. Each of the races that she did since then had "unique" circumstances including one time that the leaders (and Amanda) got lost and another when a snow storm dumped a few inches of the white stuff on the route making running a challenge. The Sean Ryan Memorial 5K in Long Beach, NY on Saturday 6/27 fit the bill to see what was what with her running. I, naturally, ran too but I knew that I couldn't match her pace.

She crushed this race. Finished in 25:37 for an 8:15/mile pace. Won her age group. Got called up onto the podium and was given her first running trophy ever . Got a medal too. Wore the medal all day. Wore the race tee shirt all day. Carried the trophy around. I was happy because she was happy. All day.

I would think this performance would be enough to let her try out for the team but you never know. I can only imagine what she could do if she actually trained and learned how to race.

She might steal my rock star moniker if she continues to improve. But then again, she would deserve it.
Posted by RockStarTri at 6/27/2009 08:31:00 PM