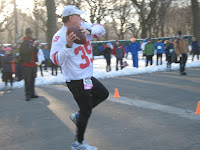 On February 1, 2009, I along with a bunch of family, friends, and more than 5000 complete strangers raced NYRR Gridiron Classic and some of us even participated in the Longest Football Throw Competition beforehand. Even though the day turned out nice weather wise later (and nicer football-wise for the football fans and the Super Bowl victorious Pittsburgh Steelers), at race time it felt cold with a bit of a breeze. I had thought about racing in shorts but was debating to wear 2 or three layers. Unknown to me the official race time temperature was 30 degrees. I wound up happy that I decided to limit the layers at 2 as I was sweating gravy later during the race.

A few posts back I gave the logic around my goals, hopes, and expectations for this race to help determine if I would be happy or sad afterwards. I did so well that there was no way that I could be disappointed in this performance. My 42:34, in addition to bettering all of the time goals I considered, set a 4m PR by over two minutes and was the fastest I've run in a long, long time. All of the other goals were hit too:

Amanda, Caitlin and the Rockstar threw the pigskin (thanks to Courtney for the picture above). Sara and Amanda ran together finishing in the same time - good enough for Amanda to be 10th place 12-14AG in her longest race ever. SisMB ran like she stole something when she first heard the huffing and puffing and then even saw the Rockstar almost catch up to her at the top of the hill at the 3 mile mark. Caitlin did well, easily outpacing me without having to resort to barfing up a lung. Michael complained about calf issues but sucked it up anyway when Caitlin started going by (we never know if this was his approach to sandbagging for the 1/2Mary on his calendar in a few weeks).

Thanks most of all to those in fans, photographers, and sherpas for getting up early and coming out on a cold morning. 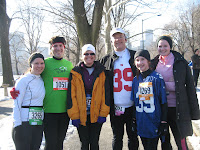 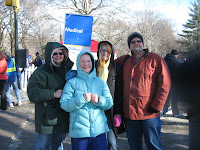