PRs, Dissatisfaction, and the Pigs. 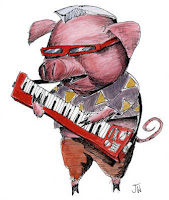 Yesterday I raced in the NYRR Fred Lebow Classic, a 5 mile race in Central Park. My personal record for this distance was 58:33, averaging 11:42 per mile. I did this PR a few days before I got hurt last June.

I've been training a lot recently and went into this race with the goal of averaging better than 11:00 per mile or a time of less than 55:00. A concern of mine was if my body would fail me in some new and unique way since my recent history of my right calf seizing during the HoHoNo DNF was followed by a pool workout last week that left both my calves screaming for a couple of days. All this coupled with my left hamstring reminding me multiple times each day that it still wasn't 100%. My race plan was that I was going to skip the first water stop, walk through the second, and skip the third by running to the end. I was going to checkpoint my time each mile and hope to be under 11:00 per.

Race day brought with it a starting temperature of about 21 degrees with a little wind. The winter storm that was predicted for that day didn't start yet (it wound up being a dud anyway). The race announcer kept reminding everyone that the spilled water near the water stops would freeze quickly so they should be careful. I never thought of that but it makes sense.

I ran the race fairly well but had to take two walking breaks. I limited them to one minute each and finished in 55:30. This took three minutes out of my PR and was the fastest I ran ever in the hills of Central Park. And yet, I was disappointed. I didn't break 55:00. I walked twice instead of once and still came in near the bottom of the finishers (2900/3224).

Most of the day Saturday I was looking for the silver lining to this cloud but kept thinking of what I didn't do vs. what I did do. Sometimes my mind works in mysterious ways and it kept going to the memory of a bowling team that I competed against named "The Pigs." I asked their leader, Dick Pig (his real first name was Dick but we called him Dick Pig), how they picked their name. His answer was "we want it all."

Now I know that I won't "get" it all but I can still "want" it all. Maybe this is bad and infantile, maybe not, but for this weekend, I was aspiring to be one of the Pigs.