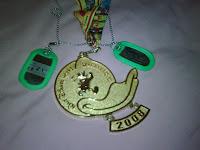 This weekend is the one year anniversary of when I "ran" the Disney Half Marathon.

Although I ran in high school, running then (at <180lbs) was mostly a social experience. Knowing me can help you figure out either how hard I worked to get the 4 varsity track letters that I earned or the actual value of those little bits of cloth. My mother recently found one of the certificates relating to the multiple awards (you only got one letter per sport) and bundled them with a bunch of stuff that she thought important at the time (ie. 7th grade report cards, library reading contests from the 1960s, school reports on Russian treaties, etc.). Since she knew that I would throw that stuff out at the earliest opportunity, she gave them to my kids for a chuckle. I don't remember most of my event times but I seem to recall a 440y (the only meters in those days were used for parking) time of ~53seconds, a 100 @ 10.4 and the 220 times are hazy at best. The only thing I do remember about longer races was that I sucked at them and they hurt. Of course, this was all 30 years ago.

After high school, my knees were shot, I didn't run for a long time and gained a lot of weight. I always had the desire to try a triathlon and had a lot of biking experience but it was always one of those "one day I'll...." type of things. My friend Mikey got hooked up with Long Island, NY chapter of Team in Training and I decided to take a plunge, spending a lot (at the time for me) of money on a Lemond road bike in December 2003. I also said that I would take the time to help others while helping myself (get in shape) while I competed in the Mountauk Century 2004 with TNT.

One of the first TNT people at the kickoff meeting that Mikey introduced me to was Pete Macaluso. Over time, Pete became a larger than life figure to me. Someone who was battling Leukemia, competing as best as he could, helping others, focusing and touching the lives of everyone he came in contact with. I rode with Pete a few times and I'm honored that I got to know him and his family a little. Pete passed away in September 2004.

Another person that I met early on was Joy. While I was trying to hide in the back of the spin classes so the real riders wouldn't notice how bad I was, Joy was back there too (with her daughter Nikole) a little frightened as well. I didn't know at the time that she was (and is) a cancer survivor as well but her story is best viewed at http://www.active.com/story.cfm?STORY_ID=12925&CATEGORY=cycling&CHECKSSO=0&SIDEBAR=21 I don't think I could say it better.

After Pete passed away, "Buttah" decided to create an award to honor Pete and his legacy. This award is a set of RoadID dogtags that read "UCANDOIT SHARE THE LOVE IN LOVING MEMORY OF PETER MACALUSO" and one person from each TNT Run team is selected to wear the dogtags during the event. I was selected for last year's Disney half marathon.

I found that wearing the dog tags is both an honor and a burden. The honor is based on Pete, his legacy and the other people who have worn the dog tags. The burden is that, as I was told by a previous big belly boy honoree, you have to finish (note I still suck at running long distances and it still hurts)! I did the event, finishing in 2:53 (my current half mary PR) and feeling proud the whole way. The picture above is of the dogtags and my finisher medal.

Joy decided to join the run/walk team this season and I found out she was selected to wear the dogtags for the Disney Half this upcoming weekend. I'm sure she will do great. I also believe that this will not be a burden for Joy and somehow, I don't know how, since she will be wearing the dogtags it brought a little more honor to my memory of the event and of Pete. Although I don't wear the dogtags that often, I've decided to wear my dog tags until after the race while I cheer for her and the rest of the team as best I can while a thousand miles away.