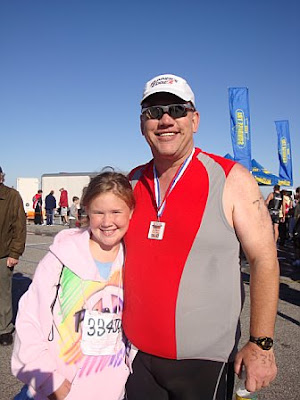 I could write about:

But the most important thing about this race was my cheering sections. Courtney and Papa got up at O'dark hundred. They were there at every transition and helped me keep going just by my knowing that they were there. I couldn't image facing them if I gave up the swim as it was "too hard." Yup, guilt works.

The 2009 Eagleman team was well represented with Captain Casey Morgan getting the golden flipper award as first out of the drink and Fran nipping him at the end after a blistering bike leg. I heard Eaglechick Christine's name announced over the loudspeaker finishing as I still had about a quarter mile or so to go. Lots of TNT and TRE folks there too with lots of stories, some good and some less so.

Thanks to Robin (aka Mrs. Capt. Casey Morgan) for the picture of Courtney and the Rockstar!