Chris Christie and another fat guy. 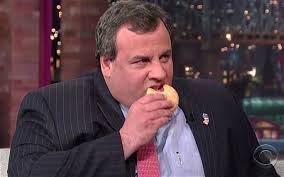 News reported last week that Gov. Chris Christie had lap band surgery last February. Dr. George Fielding of the NYU Langone Medical Center did the surgery. Since the operation it was reported that the governor has lost about 40 pounds. He has not said how much he weighed when the surgery was performed but estimates were that he was somewhere between 300 and 350 pounds.

The picture on the left was from when the he was on the Letterman show recently. I haven't seen any post surgery pictures of Gov. Christie but when I look at pictures of him from before his surgery I see someone who I consider fat. I'm sure that everyone has a different gage as to what is fat versus what is not fat but I rationalize it as someone who is much fatter than I am (at least through my eyes).

Objectively, though, I am in the same weight range as Gov. Christie. I don't think I'm as fat as he is but I guess I am. I'm not proud of this but facts are facts.

I haven't been training as much as I did in the past for a whole bunch of reasons. Am I getting fatter since I'm training less or am I training less because I'm gaining weight? I don't know. There will come a point in my life where I will not be able to train the volume that I have in the past. That point may in fact be now.

Before this news came out, I made an appointment and saw Dr. Fielding to talk about weight loss and weight loss surgery options. He is very persuasive and lays out a very well thought out rationale. One of his points is that you rarely see fat old people. Why? Because they all die before they can get old. I also know a lot of people that have successfully lost weight after a heart attack or stroke or something like that. The choice is to lose it now and avoid that potentially life ending event or not. My weight is high enough to qualify for the surgery.

I haven't decided what to do yet.

I did realize some things though. The bariatric folks are into meal replacement drinks and gave me a list of those that they recommend as healthy (you would be amazed how they differ nutritionally). I'm trying them to see if I can tolerate them by starting to have them for breakfast and will continue down the list for taste and other stuff.

Gov. Christie said that he is now working with a personal trainer 4x a week. I looked at what is preventing me from training (I know what to do) and found it is all about priority. I seem to find things (normally not significant things) that I do instead of training. There are ways to solve that problem.

I'll try this and watch what I eat. Maybe then I'll be less of a fat guy. I need to. It will be either one way or another.

I hear the pain in your words. I know that pain. I'm certainly no longer in the obese category, but it is't ever far from my mind and it wouldn't take much of a sideline (injury, life crap, etc) for me to head back there in a moment of full on binge eating. And I know it will get worse as I age (harder to train away the poor diet). One of my short term goals (in the next month or so) is to start meal planning more consistently. I need to help my mother-in-law with this too so maybe helping her will help me. I know when I plan what I eat, I make much better choices. Meal replacement bars and shakes have their place, but I do want to aim for as many whole foods as I can. So I guess I want to send a word of encouragement regardless of the route you take.

You know, I know you have to figure out what works for you, but I've had success and really enjoyed following a paleo-style diet. Getting rid of grains helped me drop weight, and I really haven't missed them.

I hear you about priorities too. I'm a master at letting things get in the way of training, though my healthy dose of selfishness means I also let training take the place of stuff I should be doing. So I put off running for stupid things but put off more important things to ride my bike.

Good luck figuring out what works for you and making the changes you need to.

In my own personal opinion, I dont think you need surgery, I think you already know how to do it and what needs to be done and that we would all support you and help you along the way

I like to think that a lot of people who chose the surgery really didn't need it. But I have this extra belly fat that won't go away no matter what else I try and now that I'm 4 months into an ironman training plan again it should be gone by now. I know we're a few years older than we were in Florida but I feel like I'm learning the meaning of "tried every other option and nothing else worked". While I'm not overweight or considering surgery, this crap has giving me a new perspective for those people that are considering the surgery.

It still seems extreme, especially when you have so much stress to manage too. Sleep management. vegetable management. how much sunlight you get. I'll support you no matter what you decide, but if you're feeling like you need to get this weight under control then you have identified the problem. and sometimes that is the hardest part.

I know this has to be a difficult decision. I know several people who have successfully lost weight through surgery and through diet and exercise alone. Neither is easy. I think many people think the surgery is the "easy" way because you lose weigh fast, but it makes a significant impact to the way you can eat for life.

I think you need to really think this through. If you are even talking about surgery than I know you are ready for a real change.

I know you could do it on you own if that's what you chose.

I wish you the best and hope you make the decision that is best for you and your family.