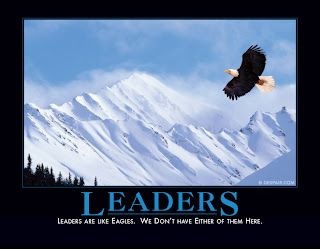 Seventy years ago today, President Franklin Roosevelt addressed Congress in what almost immediately became a historic leadership speech. Many people to this day can recall the first part of his address, "Yesterday, Dec. 7, 1941 - a date which will live in infamy - the United States of America was suddenly and deliberately attacked by naval and air forces of the Empire of Japan." Getting Congress to declare war wasn't leadership in and of itself but FDR's ability to close the deal on one of the other parts of this speech was: "No matter how long it may take us to overcome this premeditated invasion, the American people in their righteous might will win through to absolute victory."

Outside of my triathlon misadventures, I have taken many management courses and have managed a relatively large number of people. As with everything, some of these courses have been useless while others have proved valuable. One theme in one course that has resonated a long time has been the definition of the difference between management and leadership. To paraphrase, management can be viewed as the ability to get people to get a task or a group of tasks done or to achieve an objective while leadership can be viewed as the ability to inspire people to want to get the tasks done to the best of their ability or to motivate them to attain the objective. Subtle difference, yes, but important.

Sure, leadership or management can be observed in a variety ways. There are some classic examples such as in the movie Ben-Hur ( "We keep you alive so you can serve this ship. Row well and live.") or perhaps the Star Wars examples of Darth Vader ("You have failed me for the last time Admiral"). There are many examples in history of political leaders similar to FDR. My question and where I'm going with this besides acknowledging the anniversary of FDR's speech is: Who are our leaders today? Who will be our leaders in the near future?

I think one of the biggest problems with this county is that we are suffering from a lack of leadership. Merely being in a position that requires leadership doesn't necessarily mean that a person is a leader. I might be wrong about the current leaders but if I am then the direction that this country is going in must be caused by the objectives that these so called leaders are leading the country in are wrong. Perhaps it is a bit of both. Either way, we need to get better. As FDR said in that same speech "Hostilities exist. There is no blinking at the fact that our people, our territory and our interests are in grave danger."

The big question is how do we get better. I have an opinion that you may or may not agree with but without leaders, we will continue to deteriorate as a country. I would even prefer a leader that I didn't agree with than someone who I did agree with that isn't a leader. I don't see a lot of leaders stepping up in the near horizon either. This means in my mind that we aren't going to get better for a while. A super-committee being formed to provide leadership won't cut it. Actually, "super committee" might be an antonym to "leadership."

This speech happened about 20 years ago before I was born and it is still relevant today. One of FDR's closing lines was "we will gain the inevitable triumph - so help us God." We wouldn't have triumphed then without leadership and we won't now until we get it.
Posted by RockStarTri at 12/08/2011 05:51:00 AM

Excellent post Joe! I like the subtle difference in the explanation of management and leadership - two phrases that often interchangeable but inherently different.

Agree with you completely in terms of out country. I believe many people voted for Obama because during the 2008 campaign because he displayed some traits that suggested he was ready to step up and be a leader.

Unfortunately, as soon as the election was over he displayed he is nothing more than a ruthless politician and partisan hack. You could argue this statement with me but I'd just point back at recent polling numbers that indicate he is less popular than Jimmy Carter at the same time of Carter's presidency.

The depressing thing is that we do not appear to see a leader on the GOP side right now. But I guess as this point we would all at least settle for a manager.

No kidding! I was talking the other day with a friend about the difference between management and leadership, and I made the same points.

I think W was the pinnacle of bad leadership. Trying to inspire by fear may be worse than communicating nothing at all.

I'm about to dive into some more management training as well. Fun stuff.

I love it man! You should write a blog or something with that much talent. Oh ... nevermind

The world has to perfectly conspire, and the people want to be led as well. I don't know who the leaders of tomorrow are but it seems to be the last great leader the world saw was Tony Blair. But that's also example of perfect timing - England was socially and culturally primed in the early and mid '90's.

Of course, nothing lasts.

This is such a good post! I feel the same way about leadership in this country. Obama seemed a little bit like a leader at first...but then those traits seemed to fade away.

To go out on a little football limb here - i think one of the things that I love about Tim Tebow is his leadership skills. He has the ability to inspire a team to win, even when odds are stacked up against them. Too bad we couldn’t have some people running this country with Tebow’s leadership skills. :)