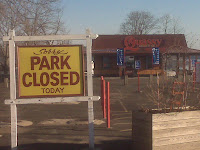 I am scheduled to race Rev3 Quassy HalfRev on June 5. I've heard rumors about how hilly this course is and wanted to check it out myself prior to race day. I persuaded Fran to join me (he is in the middle of IMLP training so hills for a few hours couldn't hurt him as a training day) so we decided to go up to Quassy early Saturday, leaving while it was still dark. We had no idea where we were going but thanks to GPS we made it there in about 90 minutes from Casa Fran.
Earlier last week I checked the race website for the cue sheet and left it at my office. When I went to print it out again I found that it was changed to mapmyride and there was no longer a turn by turn unless you are mapmyride premium member. (Boo. Hiss - I will be following up with the Rev3 folks to make sure they have opportunity to fix it). Luckily I found a cue sheet online but didn't know how accurate it was. Fran still had the window open from the other day and was able to print the formerly official one out too.
When we showed up it was 31 degrees but it didn't seem that cold. Fran commented that he thought we would see snow. I thought he was crazy but started pumping up my tires. I did the front but when I started on the back I heard the evil "SSSSSSSSSSSSSS." coming from the front as it went flat. I took a spare tube and started fixing the flat. Fran asked how many spare tubes I had since he had only one. I said not to worry since I always bring 2. Unfortunately, my spare tube had a hole in it too - double flat before we even start! Fixed it again now with my last tube and all was good except we now had only one tube for the both of us on a ride where neither of us had any idea where we were going. If we needed rescue we were a few hours from home. Go for it!
We started riding and with the wind from riding made the 31 degrees feel like less than 31 degrees. At each turn we would reach into our pocket to read the cue sheet for the next turn, put it back into our pockets and continued on. After 15 minutes Fran cursed that his cue sheet must have fallen out of his pocket and disappeared. Now we were using mine, the one of dubious origin, solo. We thought we were getting lost a few times and thanks to Fran's iphone were able to pull up a map to make sure we were on course.
My phone started ringing a few times while we were climbing and when I checked I found out that one of my email accounts got hacked. People were calling me since my email address was spamming them. There was nothing that I could do so far away but I called my wife to power off my PC. The calls continued and so did the climbing.
The best way to describe the course was grinding hills. There were a few "stingers" where I needed to get out of the saddle but mostly it was long, slow, cadence in the 60s, power at threshold for a few minutes at a time and not a lot of recovery. Mapmyride did show that there were 6 cat5 climbs and one cat3 climb (3.7 miles long averaging a little over 3%). There is more net climbing on this course than one lap of the Placid course (my Garmin measured about 3600 ft over 50 miles). Since we had no clue as to the course I really didn't want to hammer the down hills that were there from time to time. We expected to go slow and I went even slower than I expected. We found no need to do the out and back section so our ride was shortened to about 50 miles. We saw snow on the side of the road in the shady parts (genius Fran). The wind in our face on the way back just made the ride a little extra special.
My thoughts during the ride, besides how good a cheeseburger would taste, was that maybe I should consider using my road bike rather than my tri bike (I did the recon on the tri bike). I could have used some more low end gears or I need to lose some weight and get stronger. I will not be setting a PR on the bike for this course but the real reason I'm doing this race is to make sure that I pay attention and listen to my coach's race instructions. One would think that I learned that lesson when I felt stronger than I was at Timberman70.3 a few years ago and blew myself up.
There are about 2 months before race day and I'm sure I'll be visiting Quassy again for more recon. The goal for next time is to figure out where to attack and where to just suck it up. There was a lot of "suck it up" this time.
Stay tuned.
Posted by RockStarTri at 4/10/2011 11:04:00 AM

The cheeseburger thing is always a good idea.
Where exactly is the race held? I would consider a training ride with the ROCKSTAR.

Very hardcore! ...smart to do a few practice rides too.

Thanks for posting about your recon mission. I'm signed up for Quassy as well, as a nice little, tough Lake Placid training day! I won't be able to see the course before the race so it's good to know these little tidbits... like 7 climbs -eek! :)

At least it was the front tire. Sounds like the hills kept you warm. Glad you got out there on the course. Good luck with your training. Did you get the cheeseburger?

Geez...a double flat before you even started!

Sounds like a tough course. The recon is going to do you good. I'm impressed that you're out there a couple months ahead of time checking things out. Nice day's work out there!

i found this post very interesting-Quassy is one of those races I cannot wait to tackle and I have heard the horrors of the hills.
May be worth the ride to CT just to check it out ;)

Nice that you were able to brush off the nuisances of double flat & phone calls to get a good ride in!