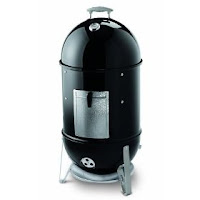 I bought a smoker, a Weber Smokey Mountain. Ordered it online. Why did I order it online? It was 20% cheaper than the local stores with free shipping. It came in a couple of days and when I put it together  I found that one of the parts (the charcoal grate) was for a different size smoker rendering mine useless.

So I called Weber customer service. After explaining the deal to the rep, the said that they would Fedex out a replacement part. I thought that OK and expected it in a couple of days at the latest.

A week later no part so I called them again. After waiting on hold for about 20 minutes I got a rep who said that the part was backordered and they expect it in about a month! Then they would send it to me but since I was probably not the only person waiting for this part I should expect it early November. I tried to explain to the rep that this was unacceptable, found it incredulous that Weber had no parts, and that my option was to return it and buy a competitors' product. They didn't get it or seemed that they didn't care. I asked for a supervisor hoping there was some intelligence up the food chain. I was on hold a few minutes and then got cut off.

Rather than wait on hold to complain again to people that don't listen I figured out Plan B. I would go to either Home Depot or Lowes and buy another of the same Weber smoker, take the part out (what I was asking Weber to do but they couldn't understand that), and return the whole thing for a refund when I get the replacement part. I had a bit of a moral internal debate since this may not be the fairest thing to do to these stores but figured it would all go back to Weber.

Lowes was sold out but when I went to Home Depot, they had the part I needed that they sold individually. $9. I bought it. Problem solved.  A simple solution to a simple problem that would have turned an unhappy customer into a satisfied customer. Weber somehow doesn't understand that simple concept. Maybe I was dealing with someone having a bad day or someone who shouldn't be in a job dealing with customers. In any case, I'm wondering if I'll ever get the correct part from them.

Hope to do the first trial/experiment this weekend. I sense that a smoker is best operated with a beer in one hand and close proximity to a football game (or perhaps "games") on TV. Probably won't help with the weight loss diet so much. I won't be racing this weekend so I have some time to figure it out.

THAT kind of smoker is a beautiful thing. cook it up boy!