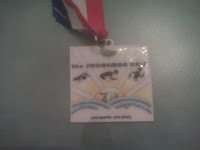 I signed up a while ago to race the Shoreman 70.3 held Saturday 9/10/11. This was a small race capped at 300 racers and I didn't know if that would be a plus or minus. I was concerned about this being a new race but the timing worked perfectly for my schedule, the race costs were reasonable, the commute to and from it was less than many other race options and the terrain was very similar to IMFL. The concerns about this being a new race were realized but I'll get into that later.

Earlier in the week I got an email stating that due to Hurricane Irene some bridges on the bike course were washed out so they needed to adjust the bike from a one lap 56 mile loop to a sort of 2 lap course that would be 57 miles. I say sort of because it wasn't a full two laps but a couple of miles from transition there was a turn around. I didn't understand why they did move the turn around a little bit to make it 56 but I guess there was a reason for that. After the race I still don't understand it though.

My goal for this race was to nail nutrition and iron pacing. It was basically going to be a long training day where I wanted to dial in the effort and practice not going too hard. I knew my time wouldn't be the best that it could be but wanted to see what time the pacing effort would turn into. I expected a 45 minute or so swim, try to keep 200 watts or so on the bike and survive the run. I say "survive" since I can't run and would probably walk a lot of it. If I could run 2 minutes of out every 5, it would be a success. If my foot/ankle started hurting, don't be afraid to DNF. I wanted to keep reminding myself this race isn't my A race.

I had very little taper going in although training this week was light. The weather report was not so favorable with a rain possible in the morning and thunder storms in the afternoon. My wife met me and work and we drove down the night before. I did a short ride to make sure the bike was set up right. I got all my stuff ready and tried to go to sleep. The hotel we picked was very loud so sleep was hard. Up at 4:30, ate a banana, drank a 32oz Gatorade, loaded up the car and went to the race site.

It was wet and cloudy, not raining but looking like it was going to rain at any moment. It was also very dark. I packed many flashlights but could only find one. The bugs were biting but I had bug spray. I set up my stuff but wrapped everything in plastic as I expected it to rain and didn't want to have to put on soggy clothes during the race. Kept sipping Gatorade and went to the swim start to neoprene up.

The sky was still overcast so I decided to go with clear lenses on my goggles. The swim was an odd configuration as it was one step up from a swamp with a left turn about 100 yards in and then an out and back. I warmed up and came back to the beach to hear the race talk. I started in the second wave with the men over 40 and tried to go pace steady. This swim was the most physical that I've ever been in. I got pummeled on this swim from the beginning to almost the end. I thought I might have a black eye from one punch in the face but I kept swimming. I didn't check my time at the turnaround because I figured no good could come from that (if too slow, moping). The swim seemed long, it seemed slow and when I popped out of the water and saw 44:33 on my watch I was happy. It took a while to get to the timing mat so my official time would up being 45:19. I was happy and the effort matched the expected results. Note that myIronman pace these days is for a 90 minute swim so this was right on.

I got to my bike. Got ready but couldn't put my foot in my cycling shoe. There was a flashlight in there. Duh. I started riding and saw I didn't reset my bike computer from the shake out ride the night before. Duh again. Then just started riding, eating and drinking. I started with 3 bottles of Ironman Perform, one bottle of water, 4 gels, and some Allen Lim potatoes. It drizzled a little but it was so humid it was hard to feel if it was raining or not. I felt I was going too hard constantly so kept dialing it back. I set up my bike computer to not read mph, just power and time since I last ate. I felt strong. The clouds burned off and it started getting hot while still humid. I dialed back the effort again. My goal was to average 200 watts and thought I overshot it. Afterwards I found I averaged 201. Right on plan and I finished 57.5 in 3:23. Right in line with a 7:00 Iron split. I felt without the dialing back I could have gone much faster.

I saw the folks getting their medals from the aquavelo and the thought quickly went through my mind that I've had a successful day already and why ruin it with a death march. I decided to start running and did my mix run/walk for the first two miles. I felt really bad feeling like I might barf and got some chills. The heat was getting to me. Many people were walking so I decided to walk more than a bit to recover a bit. The race was supposed to have Gatorade at every other stop but when I got the to first that was supposed to have it they said they ran out. Ran out? This was the first lap and the leaders were just coming around for their second lap. They had water and at every stop I drank a cup, poured a cup on me, and filled a hand flask to sip along the way. Racers were going to the wrong side of the road since there was shade on that side of the street. I kept walking. I saw my wife and she cheered me on. First lap done.

On the second lap I started to mix in some more running as I was feeling better. It wasn't a lot but it was something. I kept going. It seemed like most of the water on the course was from a hose but one rest stop said they had ice! Almost everyone left was walking now. I was approaching the finish and my wife told me to reel in the guy ahead of me. I was trying to do it for a couple of miles so I told her that was doubtful. They he screams and almost face planted on the ground. There were people running over to him as I got up to him. He said every muscle in his leg was cramping and he couldn't stand anymore. The ambulance came for him, I started jog/walking it in, saw my wife and told her I kicked that guys ass!

I made the cutoff and walked the 13.1 in 3:35. I was getting hot spots on my feet and saw a blister starting to come up. I got my medal and my wife said to get her some food. I looked at her strangely and she said she was out there all day and couldn't get anything to eat or drink. The race site was in the middle of nowhere. There was no food or drink for sale for the spectators. She offered to buy a water bottle but they wouldn't let her as they said the food and drink was for the athletes. She wasn't happy as she couldn't leave because the car was blocked in and it was miles to a store. She had a hard, hot day too but made the experience better for me. When we got in the car the thermometer said 91.

I would consider doing this race again. The course was fair and what it said it was going to be. I'm going to contact the RD and recommend that they address the food for spectators, Gatorade or equivalent sports drink, and hose water problems. Hopefully these are just symptoms of the initial running of the event and not something systematic. In summary, I did as I expected in the swim and bike. The run was not surprisingly bad but this is all part of the iron journey.
PS: I found out about the race via JoyRun's blog. Logistics made it so we didn't actually meet. She switched to the relay with some friends and was done way before me so maybe next year!
Posted by RockStarTri at 9/11/2011 04:07:00 PM

It sounds like you had a successful day, hitting your goal time on the swim and bike, doing well with nutrition, etc. Good job!

Nice job on that race!! You stayed strong to the end and didn't quit!

oh, and a flashlight in the shoe and a strange overall distance...those are things that don't happen often!

You had a good day: strong swim and bike and who can possibly run strong in that heat with only water to drink? Not me. Way to push through and finish.
I don't blame your wife one bit for being grumpy. : )

It DID get pretty hot by the run, & I'm glad I'm not the only one to have noticed the aggressiveness of the swimmers. Scary!

I thought I would totally catch up with you at transition, since my bib number was just one more than yours. Then I realized that the racks were first come first serve instead of by bib number. Oops.

Great great job on finishing that beast, though! I don't know that I'll ever do that - it was pretty frightening watching you guys come off 3+ hours on the bike to then run 13.1 more miles.